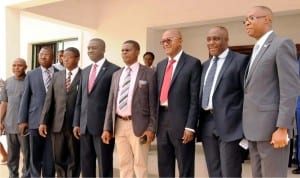 Enugu State Governor,
Lawrence Ifeanyi Ugwuanyi,has promised to assist in rehabilitating the 14 year-old SS-2 student of Government Secondary School, Apo Resettlement, Abuja, Miss Ifesinachi Ani, who was abducted about six months ago and converted to Islam.
The girl who is the daughter of one Mr. Sunday Ani from Ani-Chime family, Umunachi Ngene, Amaechi Awkunanaw, Enugu South Council Area of Enugu State, was reported to have been taken to the Central Police Station, Uwani, Enugu by the abductors, following media reports on her abduction.
Touched by the development, Ugwuanyi dispatched a delegation of top government officials, led by the state Commissioner for Gender Affairs and Social Development, Princess Peace Nnaji in company of her counterpart in the ministry of Health, Dr. Sam Ngwu,
Special Assistant to the Governor on Media, Mr. Louis Amoke, among others, to pay a solidarity visit to the family on the ugly incident.
Addressing members of the family, Governor Ugwanyi who spoke through the Gender Affairs Commissioner, told them that his administration was touched by the news of the unfortunate incident of the abduction of the 14 year-old girl.
He however, assured that he would do everything humanly possible to ensure that the girl was fully rehabilitated in line with the government policy on Child Right Act.
He said that the visit was also to rejoice with the family and thank God for the efforts made so far to release the girl from the hands of the abductors.
The Gender Affairs commissioner also noted that Governor  Ugwuanyi was interested in taking care of children of the state, adding that it was as a result of this that he supported the passage of the Child Right bill into law which protects the rights of every child within the ages of 01 to 17.
The governor argued that the abducted 14 year-old Ifesinachi was a child going by the said Act, stressing that it was the responsibility of the state government through the Ministry of Gender Affairs and Social Development to protect and rehabilitate the abducted girl.
Ugwunyi who commended the media for bringing the plight of Miss Ifesinachi Ani to public domain, equally thanked the Inspector General of Police, Mr. Solomon Arase for his prompt intervention in the matter.
According to him, when the state government learnt that the girl was at Uwani police station, Enugu, the Gender Affairs Commissioner placed a call to the Commissioner of Police who told her that the IG of Police had called him on the matter and directed that the girl and the abductors be brought to Abuja for further investigation.
Also speaking, the Commissioner for Health, Dr. Ngwu told the family of Ifesinachi that Governor Ugwuanyi as a compassionate man cares about the well-being of Enugu people wherever they are, saying that he was in the delegation as a medical expert and Commissioner for Health to make sure that their daughter who was abducted and found was medically sound.
Responding on behalf of the family, her brother, Mr. John Ani, thanked the governor of Enugu State for the surprise visit, and expressed joy that their daughter had been found.