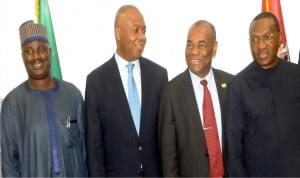 Passengers of Bristow Helicopters in Port Harcourt, Rivers State were left stranded, as aggrieved members of the National Association of Aircraft Pilots and Engineers of Nigeria (NAAPEN),), as early as 6:30am,yesterday, stormed Bristow Helicopters and shut down all its offices in Port Harcourt, thereby grounding all flight schedules.
The Tide reports that NAAPEN is an affiliate of Trade Union Congress (TUC), and would continue the shut-down, today.
The NAAPEN President, Isaac Balami, led the protesters, along-side national officials of the association, and the state Chairman of TUC, Chika Onuegbu, to shut down the operations of Bristow Airlines in Port Harcourt.
The president of the association said that “all efforts by NAAPEN to get the management of Bristow to ameliorate these acts of injustice and violation of the Constitution of Nigeria, as well as contravention of Bristow Code of Business Integrity (COBI) has failed to yield any positive result.”
According to Balami, “For the past 10 years, our pilots and engineers working with Bristow Helicopters, have suffered untold hardship due to discriminatory and slavish policies of the management of Bristow Helicopters.
“They treat them like they are in a slave camp. You will see a co-pilot who just has 200hours experience from UK, South Africa and Canada earning far more than their Nigerian counterparts who have been working for years.
“Nigerian pilots and engineers are treated like slaves in their own country. A job that a Nigerian can do, they sack him and give it to a foreigner, and pay him more. They have been sacking our co-pilots and employing white men. We are even more competent than them,” he stated.
“Today, no helicopter of Bristow will fly until the managing director comes to answer us. We have also discovered that the management does not care about the welfare of workers. So, before it becomes a safety issue, they must come and hear us,” Balami added.
Asked if shutting down the operations of the airline will assuage the feelings of his members, Balami said, “This is just a few days warning strike to draw the attention of management to need to dialogue with us. Bristow operations cover about 60 per cent of the oil and gas sector of our economy. They know the implication of shutting down, if they refuse to dialogue with us. If they don’t, we will continue for the next one year.”
On the issue of the challenges facing the company and recent air crashes by the airline, Balami said: “That is part of the problems we are going through. When it happened, both passengers and our members are affected.
“This is why they must talk to us so that we can address all the issues. What we have now, can put Bristow in a worse situation. What we have are disgruntled engineers and pilots. It is a serious problem and we cannot continue to accept the situation. For the safety of our members and passengers who fly every day, we cannot accept it,” he insisted.
He further said that, “We are not saying we want pay rise. We are not saying we want salary increments but what we are saying is: we need valid conditions of service in tandem with the labour laws. We also want pay parity.
“We have other airlines that operate in this country and they obey the labour laws. Those airlines operate within the rules and regulations of this country, where captains are treated as captains. Captains should be treated fairly whether white or black, they should be treated equally. They should not treat us as slaves in this country”, he emphasised.
Also speaking, Rivers State Chairman of TUC, Comrade Chika Onuegbu, added that: “We have shut down all the offices of Bristow Helicopters and we have told the management, staff as well as passengers that they cannot go into the company premises until all outstanding issues are resolved.”
Meanwhile, NAAPEN has directed all pilots and engineers in Bristow Group to embark on a two-day industrial action which would terminate by today.
While warning its members in the company to stay away from the workplace but remain within the vicinity during the stated period, NAAPEN stated that its officials as well as those of the Trade Union Congress, TUC, will be on hand to ensure full compliance to the directive.
At the end of the industrial action, the union threatened to take a more comprehensive action for the full restoration of pay parity between expatriates and nationals, bringing about a valid condition of service and a commitment by the management of Bristow that nationals will not be laid off as long as expatriates exist in the company.

Echoes Of A Hidden Agenda …Campaigns Of Insecurity In Rivers