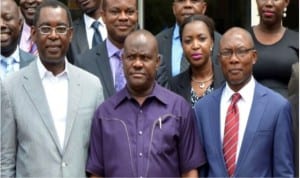 The River State Government has challenged the former governor of the state, Chibuike Rotimi Amaechi, to a public debate on the logic, financial cost, and social value of the failed monorail project along Azikiwe Road, Port Harcourt.
Amaechi had recently criticized Rivers State Governor, Chief Nyesom Wike, for not completing the controversial project.
But the state government said it would meet Amaechi for a debate on any platform, concerning projects abandoned by the previous government.
In a press statement, the Rivers State Commissioner for Information and Communications, Dr Austin Tam-George, also challenged Amaechi to come prepared with full explanations on other inflated contracts and unexecuted projects, such as, the Greater Port Harcourt City project over which N200 billion was spent with nothing on the ground to justify the huge expenditure.
Tam-George also asked Amaechi to give reasons for pulling down a standard, well-equipped teaching hospital complete with doctors’ quarters along Hospital Road, Port Harcourt, leaving only weed to grow wildly in the space where the hospital once stood.
“By that thoughtless and disastrous action, Chibuike Rotimi Amaechi restricted healthcare access for thousands of people, particularly women and children, and may have contributed to the deaths of thousands of people in the past eight years”, the commissioner said.
“Will Chibuike Rotimi Amaechi also explain how N80 billion was spent on the Rainbow Town project, near Amadi-Ama, that was originally designated in 2010 to cost N40 billion? Why does that project remain uncompleted six years after?
“How about the billions of Naira signed off the state treasury in the name of the so-called Justice Karibi Whyte Specialist Hospital, which is a fictional project that does not exist on land, sea or anywhere in Rivers State?”, the commissioner asked.
The commissioner reiterated the commitment of the Nyesom Wike-led administration to complete any relevant project that could uplift the socio-economic life of the people of the state.
The commissioner condemned the Amaechi administration for leaving the most abandoned projects in the history of Rivers State, since 1967, despite receiving over N3trillion in revenue in eight years.

INEC To Consult On Cancelled Polls