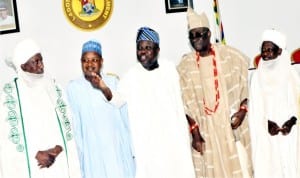 The banking industry has
restated its commitment to growth of the Micro, Small and Medium-Scale Enterprises (MSME) in the country.
The Managing Director of Fidelity Bank Plc, Nnamdi Okonkwo, said the bank had raised N30billion in corporate bonds on the Nigerian Stock Exchange (NSE).
Okonkwo said that the capital raising exercise was expected to enable the bank fulfil its promise to increase MSME lending to 50 per cent by 2017.
He added that the bank had earmarked 80 per cent of the net proceeds of the bond to finance MSMEs which have been peddled as the next cash cow.
In a similar development, Heritage Bank Ltd said on Wednesday that it had boosted its entrepreneurship support by the launch of N500 million Young Entrepreneurs and Students (YES) Grant.
Its Managing Director, Mr Ifie Sekibo, said in Lagos that the initiative was a partnership with the Nigerian Youth Professional Forum (NYPF), to support students and young entrepreneurs toward socio-economic freedom.
Sekibo said the Heritage Bank’s support for the programme arose from the fact that the initiative aligns with the vision of the bank, which is to help create, preserve and transfer wealth across generations.
He added that the bank would also support the project in terms of training the beneficiaries, disbursement of the grant, monitoring and evaluation of the project’s milestones agreed with the beneficiaries.
Also same day, the National Assembly finally passed the 2016 budget submitted by President Muhammadu Buhari.
The 2016 budget of N6.06 trillion was reduced by N17 billion, to make it lower than the N6.07 trillion estimates presented by the President in December.
The banking industry during the week also witnessed a policy decision that made the Central Bank of Nigeria (CBN) to raise the Monetary Policy Rate (MPR), an anchor rate for commercial banks.
The CBN, through the Monetary Policy Committee (MPC) raised the MPR, the reference interest rate by 100 basis points from 11per cent to 12 per cent.
It also raised the Cash Reserve Ratio (CRR) by 250 basis points from 20 to 22.5per cent, while retaining the Liquidity Ratio (LR) at 30 per cent.
The CBN Governor, Godwin Emefiele, said the Committee, “in its assessment of relevant internal and external indices, came to the conclusion that the balance of risks is tilted against price stability.
The MPC, therefore, voted to tighten the stance of monetary policy.