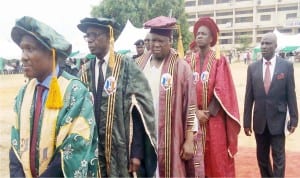 A coalition of women
groups in Enugu State, have expressed disappointment over the rejection of the Gender Equality Bill by the Senate.
The coalition, under the aegis of Gender Equality Movement (GEM), described the action of opponents of the bill as ‘backward.’
Reacting to the decision, the state Chairman, National Council of Women Societies (NCWS), Dr Rita Ugwu, said that the new Sustainable Development Goals (SDGs) could only be achieved through gender equality.
“I am disappointed that in this 21st century, people are still backward to understand that sustainable development for any nation can only be achieved if women are given the opportunity to exercise their talents.
“Why then do we have a saying that when you empower a woman, you empower the nation,’’ she said.
The Manager of Tamar Sexual Assault Referral Centre (SARC) in Enugu, Mrs Nkechi Nwabueze, described the rejection of the bill by the Senate as ‘unimaginable.’
“It is with utmost dismay that I speak against the unimaginable act by the Senate to trash out the Gender Equality bill.
“A bill on the right of people should not be trashed out based on religious dogma in a country that is multi-religious.
“The interest of all should be considered in issues like this and I feel it should be revisited,’’ she said.
Also speaking, Mrs Ada Nwoye, President, Coal City Literary Forum, said she was not sure if the senators understood the implications of the bill, adding that they might have been threatened by its content.
“There is need to sensitise the legislators more because I see no reason why they should throw out that all important bill.
“I do not think they understand the content of the bill which is to give women equal opportunity and not to fight with the men,“ she said.
A research Consultant on Gender Issues, Dr Malachy Ochei, said that culture and religion should not be an excuse to deny women their right and equality.
According to him, a society that is not engendered is endangered.
“Gender equality is a means of providing women with freedom of access to life opportunities with minimal constraints,’’ he said.
Ochei urged the national and state assemblies to give the bill another chance in the interest of the womenfolk and the nation at large.