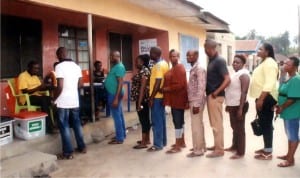 Rivers State Commissioner for Social Welfare and Rehabilitation, Hon Damiete Herbert Miller (in front), queuing for his accreditation in Ward 17 Unit 1, Oguruama in Degema, during the rerun election on Saturday in

The Independent National Electoral Commission (INEC) in Rivers State has announced the suspension of rerun elections in two more local government areas of the state, bringing the total number of local governments to eight.
The state Resident Electoral Commissioner, Elder Aniedi Ikoiwak, who made the announcement in his office at INEC headquarters in Port Harcourt, yesterday, said the two additional local government areas are Etche and Asari-Toru.
The REC explained that the suspension of the rerun elections follows irregularities and hitches which greatly jeopardized the conduct of the elections in the affected local government areas.
Ikoiwak stressed that the two local governments would join six others where elections had been earlier suspended on Saturday, including Khana, Bonny, Andoni, Tai, Gokana and Eleme, because of observed violence, irregularities and hitches in the distribution of electoral materials.
According to him, the decision to suspend the rerun elections in the affected local government areas was principally anchored on the need to protect the lives of staff and also ensure the safety of electoral materials.
The state INEC chief, who did not disclose any new date for the conclusion of the rerun elections, said that adequate consultations would be made, including strategic review of the March 19 rerun process before a new date is fixed.
“INEC is currently auditing personnel and materials sent to the field. We will also meet with critical stakeholders before a new date will be announced for rerun in the affected local government areas,” he said.
He regretted the level of violence during the exercise, and commended the commission’s staff as well as ad-hoc for their diligence and resilience, while extolling the doggedness and resolve of the men of the military and security agencies for standing firm, and repelling, in many instances, the various attacks on INEC officials.
It would be recalled that INEC conducted rerun elections in 22 of the 32 state House of Assembly seats, 12 of the 13 House of Representatives seats, and all three Senatorial District seats in the state.
Meanwhile, the Rivers State Police Command has confirmed that four persons died while 24 others were arrested during Saturday’s legislative rerun elections in the state.
The Assistant Inspector General of Police, Baba Adisa Bolanta, accompanied by other security chiefs in the state, disclosed this during a press briefing in Port Harcourt, yesterday.
Bolanta said that four deaths were recorded with one in Buguma, two in Nonwa Tai, and one in Omuanwa.
On the arrested persons, Bolanta said that 24 suspects were already with the police, with 22 males and two females, adding that the suspects were presently undergoing interrogation on allegations of electoral fraud.
He emphasised that the massive deployment of security personnel drastically helped in reducing the electoral malpractices during the elections, and appealed for the support and cooperation of the electorate to enable the force discharge its mandate to the people of the state.
Earlier, the Public Relations Officer of the state command, DSP Ahmad Muhammad, told newsmen in Port Harcourt, that the command received report about the death of one person in Eleme, Eleme Local Government.
Muhammad said 10 people were arrested in Eleme while two were picked up on their way to Akinima, Ahoada West Local Government Area.
“The suspects committed election-related offences. They are being interrogated while investigation has commenced on the offences committed,” he said.
He also said the police did not know what caused the death of a middle-aged man in Eleme and that the Divisional Police Officer in charge of the area received the report.
He said the command did necessary deployments to ensure credible elections in the state.