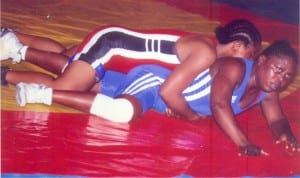 Iliya Pam and Lamide
Oluwaseun have emerged winners of the male and female categories of the 42-kilometre Integrity Marathon Race sponsored by Splash FM 105.5, a private radio station in Ibadan.
Tidesports source gathered that Pam, who had been an all-prize winner in the last three editions, emerged the winner of the male category after completing the race in 2 hours, 39mins and 37 seconds (2:39:37).
Pam, who hails from Nassarawa State had emerged 4th, 2nd and 4th in the fifth, sixth, and seventh edition respectively.
Oluwaseun from Lagos State emerged the winner of the female category after completing the race in 3 hours, 15 minutes and 20 seconds. (3:15:20).
According to the report Peter, Danjuma Gyan and Goar Moses came second, third and fourth in the male category of the race.
Four-time winner of the female category, Genevieve Njoku, Kistinwa Stephen and Gyan Stephen emerged second, third and fourth in the female category of the race.
Cheques of N600,000, N300,000, N150,000, N90,000, N60,000 were released for the first, second, third, fourth and fifth positions in the male category respectively.
Also, cheques of N400,000, N200,000, N100,000, N60,000 and N40,000 were given to the first, second, third, fourth and fifth position winners in the female categories respectively.
Pam, the winner of the male category, told newsmen that he was in the race to finance his education, adding that he had just secured admission into a College of Education.
He said that he had emerged the runner-up in the recently concluded Access Bank race in Lagos but was yet to receive the cash prize.
“I decided to participate in this one to make money to finance my education because the Access Bank race money is yet to be paid,” he said.
The marathon race was initiated by Splash Fm 105.5 in 2009, making this year’s edition the eighth.
In his message to the event, the Minister of Youth and Sports, Mr Solomon Dalung, said that it was imperative that sports should be used to combat vices in the society.
Dalung, who was represented by Mr Demola Are, an official in the ministry, commended Splash FM for starting the initiative eight years ago.
He described the initiative as laudable, saying it would complement President Muhammadu Buhari’s anti- corruption campaign while promoting good governance, transparency and accountability.
The minister called on well-meaning Nigerians, government as well as Non-Governmental Organisations to assist in grassroots sports development.
Earlier in his address, Chief Adebayo Akande (MFR), the Chairman/Founder of Splash FM, said that the race was aimed at promoting values that could help the nation to tackle corruption.
“As particular to every race, strength is exerted, devotion is required, resilience is needed, tenacity is important and consistency is key.
“These principles are needed in the fight against corruption that serves as hindrance to good governance,” he said.
Akande, the Ekefa Olubadan of Ibadanland, said that the race was in support of the present government in its anti-corruption campaign.
“We understand that the level of corruption is rife in the country and there is need to jail corrupt officials.
“We must emphasise that the fight against corruption cannot be won without the cooperation of the people,” he said.
The event also featured a 5-kilometre race tagged, “Running for a Cause”, in which participants donated their cash prizes to various causes.

Ikhana Sure Of Three Away Wins

“2016 Federation Cup Finals Is Our Target”