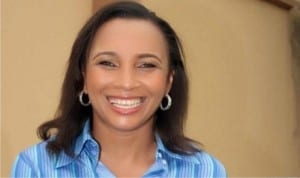 The Personal Assistant to embattled Nollywood actress, Ibinabo Fiberesima  has raised an alarm over the health status of her boss after she later bagged a 5 year jail term for reckless driving.
Fiberesima, the former president of Actors’ Guild of Nigeria (AGN) was on Friday, March 11, sentenced to five years imprisonment by Justice Deborah Oluwayemi of the Lagos High Court, over the death of one Dr Giwa Suraj, whom she knocked down in an autocrash along Lekki-Epe  Expressway.
Fiberesima had through her lawyer, Nnaemeka Amaechina, urged the court to set aside the sentence and restore the decision of the magistrate court which had ordered her to a N100,000 fine.  But the court refused to take in her appeal, thereby dismissing the appeal and affirming the high court’s judgement.  The light-skinned actress, is said to be in a precarious situation as her personal assistant, who spoke over the phone, informed that she just had an operation and it may affect her state of health.
This may have led her to ask Nigerians to pray for her as she reportedly broke into tears after the judgement on Friday, but her Personal Assistant, (PA) confirmed that “my boss has been feeling unwell since the judgement was delivered.  We are afraid it doesn’t affect her health, she just had an operation”.  Recently, the Federal High Court in Port Harcourt slammed the top Nollywood actress with a  N10 million fine in a case instituted against her by ex-Beauty Queen, Miss Earth Nigeria 2011/2012, Munachi Chineye Uzoma.
The case was presided over by Justice Adolphus Enebeli, who in his judgement, agreed with the complainant, Miss  Uzoma, that there was actually evidence to prove that Fiberesima and AMC productions limited breached a contract signed on October 28, 2011, by cheating her out of winning a beauty contest. At the hearing on Friday February 5 in Port Harcourt, the beauty queen accused Fiberesima and AMC Productions Ltd of substituting her for a 2nd runner up in the contest which they organized, preventing her from winning.
Reflecting on the five year jail term of the Nollywood screen goddess, it was gathered that the case is so interesting because parts of it are a clear case of humour in the face of an issue as critical as manslaughter.
If you recall the statement from Justice Deborah Oluwayemi on Friday March 11 when she passed the five year jail sentence, you will see exactly how unfitting and ridiculous it is to take another man’s life, be it accidental or not and then go on to pay a paltry sum as a fine, it is really sad.
There are rumours that the embatteled actress, Ibinabo Fiberesima, was tipsy on the day of the ill fated incident which claimed the life of Dr Giwa Suraj 11 years ago.

Grass To Grace The AY Story