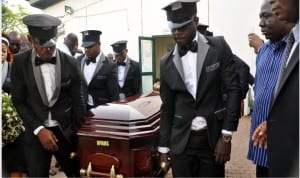 Undertakers carrying the coffin bearing body of the late Minister of State for Labour and Employment, Mr James Ocholi at the National Hospital in Abuja to his home town in Kogi State on Wednesday

Nigeria has been ranked the 103 happiest nation of the world, and 6th in Africa in the World Happiness Report.
The World Happiness Report 2016 update, which ranks 157 countries by their happiness levels, was released in Rome on Wednesday, in advance of UN World Happiness Day, March 20th.
As indicated by the report, Nigeria dropped from its 78th position in the World and 2nd in Africa in the 2015 happiness ranking.
Denmark emerged the world’s happiest place, while Algeria, standing at 38 at the global level, maintains its position as the happiest place in Africa.
Mauritius is now the second happiest country in Africa, followed by Libya, Morocco and Tunisia respectively.
According to the report, eight sub-Saharan countries were among the 10 least happy places on earth to live.
The bottom 10 were; Madagascar, Tanzania, Liberia, Guinea, Rwanda, Benin, Afghanistan, Togo, Syria and Burundi.
South Africa and Ghana stood at 116 and 124 respectively on the global happiness ranking.
Our correspondent reports that the World Happiness Report, an initiative of the UN, is a landmark survey of the state of global happiness, aimed at influencing government policy.
The report reviews the state of happiness in the world and shows how the new science of happiness explains personal and national variations in happiness.
It reflects a new worldwide demand for more attention to happiness as criteria for government policy.
According to the report, leading experts across fields – economics, psychology, survey analysis, national statistics, health, public policy and more – describe how measurements of well-being can be used effectively to assess the progress of nations.
Healthy years of life expectancy, GDP per capital, social support , perceived absence of corruption in government and business, freedom to make life decisions and generosity are some of the factors the report considers.
The first world happiness report was published in support of the April 2, 2012 United Nations (UN) high level meeting on happiness and well-being.
The report was prepared by the Sustainable Development Solutions Network (SDSN) and the Earth Institute at Columbia University.
Prof. Jeffrey Sachs is the head of the SDSN and special advisor to UN Secretary General Ban Ki-moon.