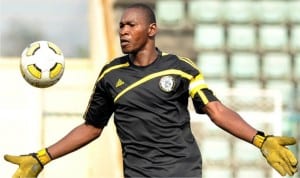 Technical adviser of Riv
ers United, Stanley Eguma must make a decision about his choice of goalkeeping personnel ahead of Saturday’s Nigeria Professional Football League (NPFL) clash with Shooting Stars Sports Club (3SC) in Ibadan.
Sunday Rotimi started United’s first five games this season but was overlooked for the match day six defeat to Niger Tornadoes in Lokoja.
Godwin Anyalogu, Rotimi’s replacement in Lokoja, impressed the coach despite conceding three goals and Eguma admits he has a decision to make as regards who starts in goal for United in Saturday’s contest against the ‘Oluyole Warriors’.
“It will be a difficult decision to make (as regards who plays against Shooting Stars) but I will wait till the last moment.
“It is a headache but a good one. Rotimi is excellent but I was also impressed with Anyalogu’s performance against Tornadoes.
“There is also (former Sharks goalkeeper) Henry Ayodele who has not played so far this season and he is one of the best goal keepers I have worked with.
“I will decide who plays (in Ibadan) on Saturday,” Eguma said.
He also discussed his side’s failure to come up with the goods on their travels thus far despite emerging as the NPFL’s best goals scorers on the road this season.
He admitted that ‘mistakes’ have been made in previous games but insists that those errors have been corrected ahead of Saturday’s big game.
“The game against 3SC is a big one and we know that they have been doing well this season.
“We hope we can correct our mistakes (from previous matches) as we go to Ibadan.
“We will map out our strategies as we go to Ibadan for the game and ensure that we do not return empty-handed,” he stated.
Meanwhile, goalkeeper, Anyalogu is still “angry” following his side’s failure to pick up any points from the match day six fixture against Torndoes in Lokoja.
The goalkeeper who conceded three goals in the fixture says United are “too strong to be losing this many games” this season.
“I am still angry that we lost in Lokoja (to Tornadoes). It was a very complicated game.
“We were the better side in the first half and had two very good chances to score. Unfortunately, we allowed them to score with the last kick of the half.
“It’s strange that despite scoring in all our matches this season, we have not managed to get a single point away from home this season.
“We are too strong to be losing this many games and now we must correct it when we face Shooting Stars on Saturday,” he said.
Anyalogu also discussed the relationship he enjoys with the club’s other goalkeepers, revealing that the camaraderie amongst them is something to be admired.
“There is no jealousy. After matches, we all sit together to critique the performance of whoever plays.
“It’s a good thing because the atmosphere is positive,” he said.
He rounded off by admitting that he would have no problems if he’s dropped to the bench for Saturday’s game.
“Have I done enough to start on Saturday? I think that is a decision for the coach but I will have no problems if Sunday Rotimi starts ahead of me.
“What is important to me is for the team to get at least a point in Ibadan.
“Losing two straight games will affect our position on the table so we must do our best,” he added.
Saturday’s game between 3SC and Rivers United kicks off at 4:15pm (5:15 CAT) and is live on SuperSport.

“No Arrival Deadline For Foreign-based S’Eagles