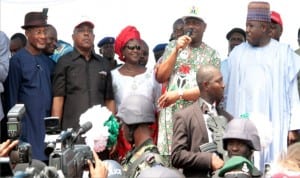 The Rivers State Governor, Chief Nyesom  Wike, has alleged a plot by the Minister of Transportation, Rotimi Amaechi, and a National Commissioner of the Independent National Electoral Commission, Amina Zakari, to swap authentic results from polling units with fake results on March 19, 2016.
Also, Governor Wike declared that any attempt by Amaechi to move around polling booths on election day will be vehemently resisted by the people who will publicly  disgrace him for violating the electoral guidelines.
Speaking during the  grand finale of the Rivers East Senatorial District Campaign Rally  of the Peoples Democratic Party at Elele in Ikwerre Local Government Area, Wike said: “All those who plan to swap result sheets, may their souls rest in peace.
“Nobody will rig in Rivers State.
“Anybody who thinks Amaechi will give them result sheets to swap should be ready to swap their dead bodies.
“I have told the REC: You were here before, you can’t play games with me.”
The  governor said it is his responsibility to take steps to stop politicians plotting to rig elections in the state with the connivance of Zakari.
He informed that the University of Port Harcourt Vice Chancellor was compelled by Amaechi and leadership of the All Progressives Congress to draw up a list of INEC Adhoc staff dominated by former APC caretaker committee chairmen and confirmed APC  members to organise the rerun elections scheduled for March 19.
He announced the names of the APC leaders on the list of INEC Adhoc staff.
Wike said he had written a formal letter with proofs and details to INEC Chairman.
The governor said President Muhammadu Buhari should not allow Amaechi to cause crisis in the state because of his personal  interest.
In his remarks, the National Chairman of the PDP, Senator Ali Modu Sheriff, stated that Rivers State is a PDP state where the people are satisfied with the performance of the  Governor.
The Deputy National Chairman of the PDP, Uche Secondus, described Amaechi as a confirmed thief who stole Rivers State monies, which he used to finance APC national campaigns.
The Rivers State PDP Chairman, Bro Felix Obuah, alleged that Amaechi is the chief sponsor of cultism in the state.
Meanwhile, the Saturday re-run National and State Assembly elections will expose the lies of the All Progressives Congress (APC), Rivers State Governor, Chief Nyesom Wike, has said.
He made the assertion while addressing thousands of Peoples’ Democratic Party (PDP) faithful at Bori, headquarters of Khana Local Government Area on Monday during the flag-off campaign for Rivers South East Senatorial District.
The governor said Saturday elections will be a mass movement by the people to resist forces of deceit and oppression.
Wike said APC was not on ground but only boasting through former Governor Chibuike Amaechi, whom he noted, has lost touch with the people.
“We will win all the seats,” Wike remarked as he urged the people not to be afraid of the threat by the opposition to use security agents for the elections, adding that, “When you want to get freedom, you must fight. So, the final sacrifice is to make sure PDP wins”.
Re-echoing the governor’s view, Deputy National Chairman of the PDP, Prince Uche Secondus, challenged the people to stand firm and defend their votes, stressing that, “all the reruns in the country so far have been won by the PDP whether in the North, West and South-South.”
The same view was held by former Deputy Governor, Engr Tele Ikuru, who described the planned use of the military by the APC as empty, and urged the people not to be afraid but come out massively and vote for the party.
On his part, Secretary to the State Government, Chief Kenneth Kobani said, “nobody should be afraid to come out and defend your votes. The Nigerian Army is the army of the Nigerian people and not of the APC.”
For Senator Lee Maeba, the plan by the opposition to use the military has reinforced the resolve of the people to vote all the candidates of the PDP, stating that the party has in the past eight months shown that it’s prepared to transform the state through people oriented projects.
In his view, Senator Adawari Pepple, assured the people that the presence of the military will not scuttle the elections, “no soldier is paid to kill, so, don’t be intimidated by anybody.”
But while recalling the mayhem and the killings of innocent people in the last three weeks in the area, Wike blamed it on desperate politicians, urging the people to resist any attempt to swindle their votes through intimidation.
He averred that he was impressed with the huge turn-out of PDP supporters for the rally, as he reiterated plans to commence the Sakpenwa/Bori Road dualization by April and also to continue the construction of the Ogoni/Andoni/Opobo Unity Road abandoned by the past administration.
Before attending the rally, Wike had paid a courtesy call on the Conference of Ogoni Traditional Rulers, where he solicited for the support of the chiefs.
He promised that Ogoni people will enjoy all dividends of democracy in his administration.
On his part, Mene Suanu Baridam thanked the governor for the visit, and pleaded for more government attention to the area.

Happiness Ranking: Nigeria Drops To 103 In World …6th In Africa