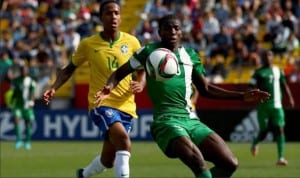 Nigeria’s youth prodigy, Victor Osimhen (right) in action. He has stated his desire to see Nigeria’s U-23 team beat Brazil in their own backyard when both countries engage in a friendly match, later this month

Former Super Eagles coach Sunday Oliseh has withdrawn a law suit against the Nigeria Football Federation (NFF), saying it is in the interest of the country.
“I have instructed my lawyers to withdraw the law suit against the NFF,” Oliseh announced on YouTube.
“After speaking with well-meaning Nigerians, who I respect a lot, I also believe it is useless joining issues with people who are bent on deceiving Nigerians and misleading Nigerians and diverting attention from the reality.
“Certain vested interest in the NFF put their own interests first before that of Nigeria. My position of putting Nigeria first was a hindrance to certain vested interests in the NFF.
“If you put Nigeria first, you will always have problems with the NFF.
“This also explains why the benefits of players and wages and coaches are always placed secondary, while other things like team building trips (for FA chairmen) will always be catered to first.”
Oliseh further alleged that rather than for the technical committee to offer him technical assistance, they prefer to impose players on him.
“I asked the technical committee for information to help us against Egypt since July 2015, but I got no such information,” he said.
“Instead what they found more important to them was who will play for Nigeria, who is invited, who will play and I refused because they are not coaches.”
Oliseh also gave more insight surrounding his resignation.
He disclosed he presented a demand letter dated February 16 with a deadline of February 25, no phone call or email was made to address this matter and he then resigned by midnight of February 25.
Meanwhile, the immediate past Super Eagles’ Coach, Sunday Oliseh, has claimed that the Nigeria Football Federation are still owing him N111 million.
The amount covers medical expenses, match bonuses and allowances incurred during his six-month reign as the national team’s gaffer.
Oliseh stated this in a letter addressed to the Secretary General of the NFF and made available to The Eagle Online on Tuesday.
In the final breakdown, the gaffer is demanding the payment of $10,000 being the winning match bonus against Swaziland; daily allowance for nine days, which totaled $3,600; food for Chan Eagles at $3,700; flight ticket refund for Chan Camping in Pretoria, South Africa; Chan winning bonus and draw at $6,000; while his medical expenses is put at $11,200.
Though, the former Super Eagles skipper has ordered his lawyers to withdraw a suit against the NFF, but he could drag them to the World football governing body, FIFA, if they fail to pay the money owed him.
Oliseh, in his letter to the NFF, gave a 10-day grace to effect payment and the deadline lapses on Wednesday.
The coach also denied being paid N20 million a day before tendering his resignation letter to the NFF.
He said he was only paid N13 million as salary for the month of December 2015 to February 2016, and the another N5 million for his accommodation while in the country.
It can be recalled the coach quit his post last month after accusing his employers of lack of support to him and the Super Eagles players.