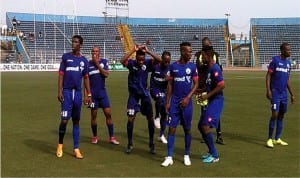 Rivers United warming up before a match

Super Eagles’ Interim
Coach Samson Siasia has readmitted into camp midfielder Stanley Dimgba, after he was suspended for reporting late to the national under-23 team’s camp.
The Tidesports reports that Dimgba, alongside defender Segun Oduduwa and midfielder Usman Mohammed, were axed on Monday by the coach.
He had barred them from entering the Super Eagles camp for lateness to camp.
“Dimgba is back to the camp because he trained with the team this evening (Monday),’’ Patrick Paschal, the Super Eagles Coordinator, told newsmen.
The trio was drafted to the Super Eagles from the under-23 team preparing for the Rio Olympics Games, ahead of senior team’s preparations for AFCON qualifying matches against Egypt.
The encounters against Egypt are scheduled to take place on March 25 in Kaduna and March 29 in Alexandria, Egypt.
Paschal disclosed that Siasia had also sent Daniel Emmanuel and Ogenekaro Etebo away for lateness, alongside Dimgba, Oduduwa and Mohammed.
“These players didn’t train with us in the morning but they joined up with the rest of the players on Monday evening training.
“Dimgba, Etebo and goalkeeper Emmanuel are training with the Super Eagles team now.
“However, as at Monday evening, Mohammed and Oduduwa were yet to join the team’s training. But, it’s likely the coach will allow them on Tuesday,’’ he said.
Tidesports reports that 11 players out of the 22 invited home-based players trained on Monday under Siasia and his assistants in readiness for selection ahead of the crucial encounter.
They are Chima Akas, Etim Mathew, Orji Kalu, Ezenwa Ikechukwu, Femi Thomas, Bright Onyedikachi, Chibuzor Okonkwo, Sincere Seth, Emmanuel, Etebo and Austine Obaraokpo.

Federation Gets Office Equipment After Championships