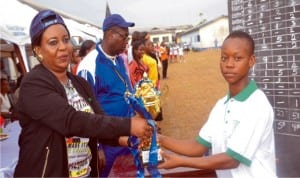 The principal of Holy Ro
sary College, Port Harcourt, Bar Vero Efika, has solicited for the support of parents, guardians and old Girls of the school, as towards acquiring well as philanthropists in securing the school’s sporting facilities to engage the students meaningfully.
Efika, who made the appeal at the school’s 5th Inter-House Sports competition held at the weekend said, “we need you to partner with us for the proper development of these children, intellectually, physically and morally”.
She stated that the highest function of education is to turn out the best integrated individual who is capable of dealing with life as a whole.
“It is the Holy Rosary College standard that emphasis be given towards meeting the demands of the three domains with emphasis on character formation and discipline. A child with good character and discipline is well equipped to face any intellectual challenges”, said the principal.
The principal urged parents to view sports beyond entertainment and improvement of the physical well being but to also consider the exposure it gives as well as the enormous wealth it helps the individual to generate.
Mrs Levula Kpakol, emphasized on the need for the involvement of private investors in the nation’s sports development noting that Nolly wood and Beauty Peagents  have got to the height in Nigeria today because of the wonderful impact of private investors.
Kpakol who was mother of the Day at the evet said the best way to get the champions of tomorrow is embark on vigorous talent hunt in the schools and community, sports competitions where they abound.
She called on the Rivers State Government to consider the presence of Sports facilities in the private schools before they are given approved to operate since the absence of sports would not guarantee the total upbringing of a child.
The mother of the day, lauded parents for their growing interest in allowing their children and wards to participate in sporting and extra curriculum activities stressing that some people have become world heroes today because of their talents in sports.
“If a child is not good here, it does not mean that such a child is totally useless because she can as well be good in other areas,” she stated.
The Admins secretary, Catholic Education Board, Mrs Josephine Ogolo, said that the importance of sports development cannot be over emphasized in scheme of things in Catholic schools, and pointed out that sports is like a tradition which the Catholic schools participate with passion.
Ogolo maintained that apart from school inter-house competitions, the Board also organizes Catholic Children Day and Zonal Sport meets to allow the students express their sports prowess.
At the end of the competition, White House emerged the overall best with 75 points, while Blue House and Green House came second and third with 73 points and 62 points respectively.