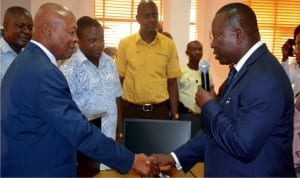 CEO, Charkin, Maritime and Safety Institution, Sir Charles K. Wami (right) in a hand shake with the Vice Chancellor RSUST Prof. Blessing Didia shortly after donating some sets of desk top computers to the department of maritime of RSUST last Wednesday. With him are departmental staff of the institution. Photo: Nwiueh Donatus Ken

Members of the
Maritime Workers Union of Nigeria (MWUN), Port Harcourt port embarked on a protest on Wednesday over illegal sacking of about 350 on-board security and tally clerks of the port.
The protesting workers disrupted ports activities, demanding the management to explain the rationale behind their sack.
Commenting during the protest, the chairman, MWUN, Port Harcourt port, Comrade Anthony Wokoma condemned the sacking of its members without genuine reason and considering the nature of the important services they render.
Wokoma said the on-board security and tally clerks proliferation of illegal arms and containers at the ports, and called for the immediate reinstatement of the sacked workers to avert further protest.
In his reaction, the trustee of the union, Pool Unit, Port Harcourt port, Samuel Abraham accused politicians for being behind the sacking of the workers, saying that they want to hijack their jobs from them.
Abraham called on the management of NPA to pay the workers four months salary and one and half years arrears owed the workers rather than sacking them at this critical period of the economy.
Meanwhile, the zonal Vice President of the Maritime Workers Union of Nigeria (MWUN), Comrade Waite Harry has said that although they could not fight government, but if they refused to reinstate the dismissed workers, they would shut down ports activities so the authorities would to call them for a round table talk.