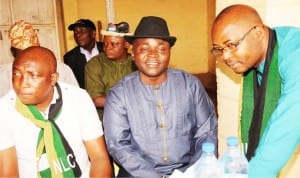 A university teacher,
Prof. Cletus Agu, has called on Nigerians to patronise home made goods as part of effort to tackle the current economic challenges in the country.
Agu, a Senior Lecturer at the Department of Economics, University of Nigeria Nsukka, made the call in an interview with newsmen in Nsukka recently.
He added that when Nigerians patronised home made goods, the move would remove the country from import dependent nation and increase the value of naira to the dollar.
“it is only when you produce and export that the value of any country’s currency will appreciate and its economy will improve.
“I don’t know why Nigerians have penchant for imported goods at the expense of locally produced goods; this has continued to weaken the strength of naira.
“Until Nigerians rethink and start patronising locally made goods, this will reduce the level of imported goods and the economic woes of this country will continue,’’ he said.
He said that local farmers who produced rice might stop producing because of low patronage resulting from flooding of Nigerian market with foreign rice.
“Local rice farmers are presently experiencing low patronage because of flooding of Nigerian markets with foreign rice.
“Locally produced rice tastes better and more nutritious than foreign rice, yet, people continue to buy foreign rice.”
On the present increase in prices of goods and services in the country, the economic expert attributed the development to the poor situation of the economy of the country and the resultant inflation.
“Nobody can predict the time lag of this inflation but its end will depend on measures put in place by Federal Government to tackle it. “It may last for short or long period depending on market forces and effective measures put in place to correct it,” he said.
“Cost production of some goods which has direct or indirect influence on others, for example, a bag of sachet water now sells for N150 as against N80.’’
The don also urged various levels of government to encourage locally produced goods to drastically reduce the number of imported goods into the country and improve the value of naira to dollar.
“If we continue to import almost everything into this country, the value of naira will continue to depreciate, but if we export more goods, it will strengthen the value of naira.
“In order to increase the consumption of locally made goods, government should set up a board that will ensure that goods produced in this country meet international standard.
“If government encourages local production as well as its consumption, in no distant time, the Nigerian economy will bounce back.’’