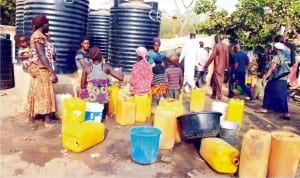 The United Nations De
velopment Programme (UNDP) in its agenda for sustainable development listed the provision of clean water as one of the central pillars for sustainable development.
The UNDP’s position may have informed the commitment by the present administration in Rivers State to attach much importance to the provision of water to rural communities in the state.
It would be recalled that Governor Ezenwo Nyesom Wike had recently approved the sum of N200 million as the state counterpart fund for the European Union-Niger Delta Support Programme (EU-NDSP) for the provision of water to communities in Opobo/Nkoro and Akuku-Toru Local Government Areas.
However, as the government sources for funds for the realisation of the programme, communities in the Odual and Emago Kugbo axis of the state are still counting their losses following years of neglect by the authorities in the provision of clean water to the area.
It would be noted that most communities in the Odual and Emago Kugbo district of Abual/Odual Local Government Area are dependent on the Orashi River and  Kugbo Creek for their sources of drinking water.
Information available to The Tide reveals that apart from drinking from the rivers, the rivers also serve the communities for purposes of refuse evacuation, bathing, washing and transportation.
The source also revealed that, in the Odual axis, the only attempt by any government or corporate organisations was in 1994 when the Nigerian Agip Oil Company awarded a contract to George Fente for the construction of a borehole at Ogboloma, but the water was not suitable for drinking following the presence of iron.
Communities which depended on the Orashi river as source of drinking water include, Ogboloma, Adada, Emelego, Emago, Kugbo and Okolomade, while Anyu, Obelum and Emirikpo depend on burrow pits as sources of drinking matter.
The problem of these communities, The Tide, learnt are further compounded by the lack of access road and medical facilities and this has resulted to high mortalities from water borne diseases such as, Cholera, Diarrhea and others.
Mr. Agara Victor John Samuel, an indigene of Ogboloma in the Odual district of Abua/Odual Local Government Area, told The Tide in an exclusive interview that the entire livelihood of the people depended on the Orashi River.
“That River is the only thing we know in Odual. We swim there, defecate, fish and drink there.
Mr Samuel said that, because of this, Cholera is common in the area and no effort is being made by any government  or agency to address the situation.
He took a swipe at the immediate past administration of Chibuike  Rotimi Amaechi for abandoning the General Hospital in Emelego to build a health centre in Ogboloma with no equipment or personnel. According to him, taking sick people from the area to either Port Harcourt or Yenagoa for treatment is always difficult because of lack of access road.
Also speaking to The Tide on the issue, Mr. Edwin Sokari Edoghotu from Emago, said that the only attempt to get clean water in is community was in 1997 when Zako Pracklers, an oil servicing company constructed a borehole for the community.
Mr. Edoghotu said that the effort was welcomed by the people at that time, but the borehole could not serve the needs of all the communities.
“Presently, the borehole is still there but not functioning,”he intoned.
He added that two former councillors from the area also pooled resources together to build a borehole, but the water was condemned, because of the presence of iron.
Mr Edoghotu further said that apart from the problem of clean water, Kugbo Creek is also blocked by water hyacinth, thereby making navigation difficult.
He urged the government to come to the aid of Kugbo communities as the area has contributed so much towards the economy of both Rivers State and Nigeria.
On his part, an indigene of Okana community, Mr Soyomon Wodo described the situation as very horrible.
Mr. Nwodo said that apart from the pollution of the river by faeces and water hyacinth, the recent oil spills at Kugbo also added to the problem as the entire stretch of the river from Abua to Kugbo was polluted with crude oil.
He called on the government to come to the aid of the people by providing them with basic amenities such as water and health facilities.
The Rivers State Commissioner for Water Resources and Rural Development Hon. Walter Ibibia was not on seat when The Tide visited the ministry, but an official in the Department of Rural Water Supply and Sanitation Agency (RUWASA) who spoke under condition of anonymity said that the agency was yet to receive complaints from the affected communities on the issue.
He also said that no community in the state would be left behind in the government’s rural water supply programme and urged the people of Emago Kugbo and Odual to follow the appropriate channel in the presentation of their issue, assuring that it would be given adequate attention.