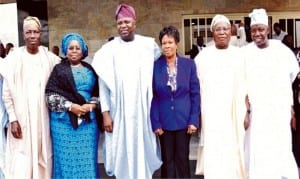 Bauchi
Acting Rector of Abubakar Tatari Ali Polytechnic,
Bauchi, Dr Suleiman Lame, said that the institution had secured the accreditation of 39 courses within nine months.
Lame, said in an interview with newsmen  in Bauchi that before May 2015, only five courses run by the 27-year-old school were accredited.
“Unfortunately, even the five courses that we have then, the accreditation of four expired in February 2011 leaving only one, which is computer science.
The rector said five of the accredited courses were for Higher National Diploma.
Lame said that the state government and TETFUND had improved the school’s infrastructure, including laboratories, workshops, hostels and construction of new school of general studies, engineering, vocational and technical studies.

The Benue State Government said it had commenced
the rehabilitation of both federal and state roads across the state.
The Commissioner for Works, Transport and Power, Mr Emmanuel Manger, made the disclosure in an interview with  newsmen in Makurdi.
He said the rehabilitation became necessary due to the frequent road crashes they caused, leading to loss of lives and destruction of food and cash crops.
Manger added that both the state government would also repair its roads simultaneously with the federal government roads.
The commissioner said that the federal roads would be rehabilitated in consultation and collaboration with the Federal Ministry of Power, Works and Housing.
“The Minister of Power, Works and Housing, during his visit to the state, gave the assurance that federal roads fixed by states government would be duly reimbursed,’’ he added.

President Muhammadu Buhari has directed the Minis
try of Foreign Affairs and the National Hajj Commission, NAHCON, to negotiate with Saudi authorities on improved terms and conditions for Nigerian pilgrims performing Hajj.
This,is contained in a statement issued by Senior Special Assistant on Media and Publicity to the President Mr Garba Shehu,  on Saturday in Abuja.
According to it, the decision followed the completion of talks with rulers of the Saudi Arabian Kingdom after the acceptance by its government to freely and openly discuss outstanding issues with Nigeria.
The statement said President Buhari, among others, also requested the Saudis to conclude all issues with the Nigerian Hajj Commission.
Such issues it said, included the undetermined outcome of Saudi’s investigation into the stampede at Muna in 2015 where it was believed that 274 Nigerians died.

Governor Ibrahim Dankwambo of Gombe State, said
recently that the state was intensifying the campaign on breast feeding.
Dankwambo said this in Dukku during a courtesy visit to the Emir of Dukku, Alhahi Haruna Rasheed in Dukku Local Government Area of Gombe State.
Our correspondent reports that the Chief of Nutrition, UNICEF, Mr Argan Dewagt, said that Gombe State “is doing very poorly in the area of exclusive breast feeding.’’
The governor made an appeal to Dukku monarch to speak to his subject on the need for every mother to breast feed her child exclusively.
“It is important for every woman to breast feed her child for the maximum period of 18 months.
“It is important because the breast has all the nutrients needed by a child.
“I want the traditional and religious leaders to carry out this campaign among the people,” he said.

A Lagos lawmaker, Mr Olushola Shokunle has urged
both the Federal and State governments to be more committed to youths development to secure a future for the nation.
Shokunle, representing Oshodi/Isolo I at the Lagos State House of Assembly made the appeal in an interview with newsmen in Lagos.
According to him, Nigerian youths have all it takes to change the image and fortunes of the country.
He said, “The government should take the responsibility to make our youths productive and channel their youthful energy to developmental activities.
“Government must give the youths the proper attention to make them positively productive and engaged.

The Kaduna State Government has announced the re
lease of 19 inmates of Birnin-Gwari Prisons, as part of ongoing efforts to decongest prisons in the state.
This was contained in a statement issued in Kaduna by Mr Barau Emmanuel, Technical Assistant on Media to the state Attorney-General and Commissioner for Justice, Ruth Dyeris-Sijuwade.
It said that the prisoners were released after evaluation of their cases by the Committee on Prisons Decongestion, headed by the commissioner.
According to the statement, those released were mainly first time offenders for non-capital offences and those held for offences not found in law.

Residents of Lokoja, the Kogi State capital have ex
pressed shock and anger over the demolition of five popular landmarks and monuments in the city on the orders of Governor Yahaya Bello.
Also affected are the Lugard Roundabout in front of the Government House, erected in memory of Nigeria’s former Governor-General, Lord Fredrick Lugard, and the popular Kogi Circle, erected to mark the creation of the state in 1995.
Also demolished are the Welcome to Lokoja Roundabout, built at the entrance of the city to welcome visitors from South Western Nigeria.
The popular NTA Roundabout and the one adjoining the Government House and the Government Reserved Area were also demolished.
Niger

A former member of Ogun State House of Assembly,
Mrs Adijat Adeleye-Oladapo, says knowledge of Information and Communication Technology (ICT) can curb unemployment in the country.
Adeleye-Oladapo, a two term member of the Assembly, said this on Saturday while addressing the Batch nine graduands of the Motunrayo-Adeleye Free ICT Centre at Akute, Ifo Local Government Area of the state.
She urged the youths, irrespective of their socio-economic background, to embrace the principles and practices of ICT to further reduce unemployment rate in the country to its minimum level.
The former lawmaker said that the establishment of the centre was part of her efforts towards ensuring that everyone in Ifo II constituency, especially indigent citizens, acquired necessary information and communication technology skills.
Osun

The Ooni of Ife, Oba Adeyeye Ogunwusi Ojaja II has
officially declared Ile-Ife as a tourism zone and called on individuals, groups, government and entire Africans to support him translate the dream into reality.
Oba Ogunwusi made the declaration during a summit at the Oduduwa Hall, Obafemi Awolowo University, Ile-Ife.
He said Ile-Ife was blessed with natural and mineral resources and endowed with tourist attractions, “and that is why I planned to use the sites to create wealth and improve infrastructure for Ile-Ife and the Yoruba land.

The Federal Government has restated its commitment to
bridging the gender gap in education.
The Minister of Education, Alhaji Adamu Adamu, said this in Sokoto at the second steering committee meeting of the forthcoming Girls’ Education Conference.
The conference, whose date was yet to be fixed, is being jointly organised by the Sultan Foundation for Peace and Development, UNICEF and the 19 Northern state governments.
Adamu said: “The federal government will do everything humanly possible to bridge the gap between boys and girls across the nation.
“The federal government places greater emphasis on education and it is on the front burner of its policies and programmes.”
Yobe

Rep. Sabo Garbu (PDP-Potiskum/Nangere), has distrib
uted various items aimed at empowering 100 women divorcees and widows toward self reliance.
Our correspondent reports that items presented at a ceremony in Potiskum included raw materials for soap, cream and detergent making, tailoring and knitting machines as well as other complementary items.
Speaking at the occasion, Garbu advised the beneficiaries against selling the items.
The legislator said that the items were in addition to tricycles and grinding machines he had earlier distributed to youths in the area.