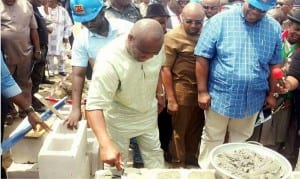 The phase two of the Mile One Market complex will be expanded to check street trading, Governor Nyesom Wike has said.
The Rivers State Chief Executive made the disclosure while laying foundation for construction of the phase two of the market yesterday in Port Harcourt.
According to Wike, some of the adjoining properties sharing boundary with the market would be acquired to give room for a complex that would house make shift traders and those trading on roadside.
The plan came as Chairman of Monier Construction Company(MCC), Senator John Azuta Mbata pleaded that more land be provided for parking space, a wet space for open trading in order to check street trading.
Wike while approving the expansion plans, called on the construction firm to complete the project as projected “ We are not just going to do ground breaking ceremony, please in the name of God this market should be completed at record time.,” he said, noting that the era of abandoned projects was over.
Calling on the contractor to engage indigenes in the project, Governor Wike  assured the Rumuwoji community that their interest would be protected once the market is completed.
Earlier, Commissioner for Housing, Barrister Emma Okah said the project was in fulfillment of the electoral promises made by the governor last year.
Barrister Okah stated that the new complex  will have 3,356 stalls, a clinic, elevators, union offices, 72 toilets.
Aside that, he disclosed that the market would have office for the State Internal Revenue Service, a standby generator, banks and a two level car park underground for 230 vehicles.
The Commissioner for Housing while decrying the abandonment  of the project over the years by the previous administration, recalled that the market was gutted by fire on 17th December 2013 and since then no effort was made to rebuild it despite the hardship faced by the traders.
Caretaker Chairman of Port Harcourt City Council, Sir Sam Ejekwu noted that the market would boost the economy of the city and community.
Sir Ejekwu also said the second phase of the market would correct the defects in the first phase,as traders would now have enough space to sell their wares.
Nyeweli of Rumuwoji Community , Eze John Dike on his part commended the governor for fulfilling his campaign promise,, maintaining that the market known as  ”Ahaezi Rumuwoji’ will improve commerce and economic activities in the area.
Meanwhile, Rivers State Governor, Chief Nyesom  Wike, has called on the contractor handling the second bridge  on the Woji-Akpajo road to expedite  action  on the work.
Speaking  when he inspected  work on the bridge yesterday,  Governor  Wike  urged the contractor to work towards delivering the  project before the end of August,  2016.
He assured  the  contractor that funding  will not be  a challenge  in the completion  of  the  work.
The governor who was accompanied  on the project inspection by Former Minister of Sports, Dr Tammy Danagogo also visited NLNG-Nkpogu bridge which has reached 90 percent  completion level.
Governor Wike  urged the contractor to ensure that the finishing of the bridge is done in line with approved specifications.
The governor  also  visited  ongoing projects in Port Harcourt and Obio/Akpor Local Government Areas of the state.

‘No Plan To Sell Songhai Farm’