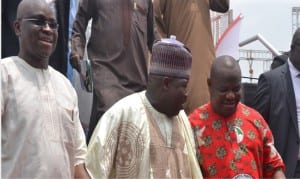 The Movement for the Survival of Ogoni People (MOSOP) has urged world leaders, particularly the United Nations, to call the Federal Government to order by prevailing on President Muhammadu Buhari to withdraw the army of occupation in Ogoniland for the peace and stability of the country.
In a statement in Bori, the traditional headquarters of Ogoni people, after unscheduled visits to Yeghe and Bori to assess the extent of damage of the February 22 and 23, 2016, military operation, MOSOP President, Legborsi Saro Pyagbara, said that the action re-enacted the dark days of the Ogoni struggle, when the late Sani Abacha junta used intimidation, harassment, torture, extortion, and rape by the military to silence the voice of freedom and liberation.
He reiterated MOSOP’s earlier condemnation of the military invasion of Ogoni communities, saying that the action reminds the people of the consequences of military occupation in the early 1990s, following the killing of prominent sons of the area in a Federal Government-engineered crisis.
In the statement, signed by the Media and Public Affairs Adviser, Bari-ara Kpalap, the president told aggrieved Ogonis that “MOSOP has already reached out to its allies both locally and internationally, particularly the United Nations, to bring this matter to their notice, and to ensure appropriate redress.”
Pyagbara called “on the Federal Government, to immediately direct the withdrawal of military forces from all Ogoni communities, and also dismantle all road blocks,” which he alleged, “are disturbingly used as extortion and torture posts by security operatives.”
He further urged the Federal Government, to as a matter of urgency, “set up a high-powered commission of inquiry, to investigate all issues relating to the current disastrous military occupation in Ogoniland.”
Pyagbara also called “on well-meaning individuals and citizens to join MOSOP in condemning this heinous crime being committed against the Ogoni people by the military.”
The MOSOP president said that the invasion, which “led to the wanton destruction of lives and property in Yeghe community, including the home of Solomon Ndigbara, and the subsequent reprisal vandalisation of the campaign office of Senator Magnus Abe, and loss of several lives in Bori and its environs”, remains unacceptable and condemnable.
The MOSOP leader, while condemning the activities of criminals in the area, decried the military campaign that had occasioned the needless loss of lives of innocent citizens and residents living in Ogoni.
“Under no circumstance is this level of military campaign justifiable in an area that there was no visible incidence of conflict before the launch of the campaign. I was in Yeghe and Bori on Sunday, February 21, there was no crisis, and there was no conflict,” Pyagbara said.
Speaking to the father of one of the deceased in the military-gunmen face-off, Mr Justus Tambari Nwika, whose son, Joel Suanu Justus Nwika, was shot dead along Taabaa Road, Bori, the MOSOP president extended his condolences to the family, including other families who lost their loved ones in the conflagration.
He assured the survivors that justice must be done to those who unleashed terror of innocent people, adding that “all those involved must be brought to book.”
It would be recalled that the Commander, 2 Amphibious Brigade, Nigerian Army, Port Harcourt, Brigadier-General Steven Adebanji, said shortly after the operation, that a detachment of the Army, while responding to a distress call in Yeghe, Gokana Local Government Area, had been attacked by a group of gunmen.
The gun duel had resulted in the death of some persons and destruction of the home of Peoples Democratic Party (PDP) strongman and ex-militant leader, Solomon Ndigbara, said to have been declared wanted by the Federal Government for alleged gunrunning, kidnapping and other crimes.
The Tide learnt that following the face-off in Yeghe, the gunmen had retreated, and launched a reprisal attack on the senatorial district liaison office of Senator Magnus Abe in Bori, Khana Local Government Area of the state, detonating a suspected bomb and setting the building ablaze.
The military was said to have responded to the attack on Bori, resulting in the death of many, maiming of innocent civilians, arson and destruction of property worth millions of naira, as well as disruption of social and economic lives of the people.
The Tide gathered that authorities of the state-owned Kenule Beeson Saro-Wiwa Polytechnic, Bori, had to order students and lecturers to restrict their movements to the campus to avoid being hit by stray bullets from the cross-fire.
A visit by The Tide correspondent to Yeghe and Bori, last Tuesday, revealed that the two communities were like a ghost town as residents had fled to neighbouring communities for their safety.
While reacting to the military operation, the state Governor, Chief Nyesom Wike, had appealed to fleeing residents of the two communities to return home as normalcy had since been restored, adding that the operation was part of government strategy to curb violent crimes in the communities, and ensure the security of lives and property of innocent citizens.