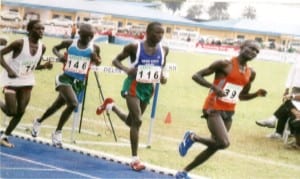 Two Nigerian athletes
that emerged as winners at the last Lagos City Marathon are to be sponsored to the April 3 Paris Marathon.
The two are Sharubutu Philibus, 27, from Nassarawa and Dinatu Yohanna, 26, who would don the Nigerian national colours at the event, courtesy of Schneider Electric, a Lagos-based subsidiary of a multinational company.
Ironically, the main company is the title sponsor of the Paris Marathon.
Philibus, who spoke on behalf of his colleague at a news conference called by the Office of the Lagos City Marathon to unveil them, said he was proud to be associated with the event.
“I am proud of the Lagos City Marathon. It is the best in the world.’’
Earlier, Deji Tinubu, the Chairman of the Main Organising Committee (MOC) held on February 6 said, although Schneider Electric did not participate during the event, they were interested in being a part of the success story of the marathon.
“I am happy to announce to you that the company’s commitment toward bankrolling these two athletes to the Paris event is part of the gains that Lagos is reaping from hosting such a big event.
“I can assure you that we will reap more benefits from the event. Indeed, the company says it will be part of the future marathon events involving Lagos State,’’ Tinubu said.
Solomon Ogba, the president of the Athletics Federation of Nigeria (AFN) hailed Gov. Akinwumi Ambode of Lagos for his enthusiasm in backing the staging of the marathon, which was supported by Access Bank.
“The marathon has opened a new vista. Long distance racing was a way of life in the 1960s and the ‘70s. Lagos is only spear-heading a resurgence of what has been a part of the country in the past.’’
According to him, it existed then as a cross country, usually held at weekends and also in the secondary schools.
“We at AFN have decided to endorse the Lagos marathon as a full marathon — indeed the flagship — while states like Uyo, Port Harcourt, Bauchi and Warri, itching to stage such an event, will be restricted to between 10 to 15 kilometre races.
The representative of the company, Anne Eze, the Field Marketing Director, said that they were associating with Lagos as a way of reinforcing their commitment to the state that had taken the bold step to host the event.
“We are a global brand in the energy business. We support life because electricity, which is our core mandate, supports better life with sustainable electricity supply.’’
She said that Schneider Electric’s Paris Marathon would provide a perfect opportunity to link their brand to the spirit and value embodied by the timeless challenge of the marathon and focus on the people, technologies and the ability to do things differently.