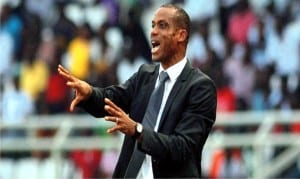 Super Eagles coach, Sunday Oliseh, has asked that Nigerians put behind them recent misgivings so as to forge a united front that will beat Egypt in an AFCON 2017 qualifier next month.
Nigeria will battle Egypt in a decisive AFCON qualifier on March 25 with the reverse leg in Egypt a couple of days later.
Seven-time African champions Egypt are top of the qualifying group with six points, while Nigeria are two points behind with only the group winners assured of automatic passage to the AFCON in Gabon in January 2017.
Oliseh has therefore urged that all be forgiven and forgotten after the country failed to go past the knockout stage of the 2016 CHAN, followed by his YouTube outburst and the fallouts thereafter.
“We have to move on, the interest of our nation should come first,” pleaded the coach, who has already tendered an apology to his employers.
“We have to fight Egypt and not ourselves now. We have to come together. Nigeria comes first.
“We have to be in Gabon (AFCON 2017) and Russia (2018 World Cup).”
Meanwhile, Tunisia ’94 Africa Cup of Nations winner Isaac Semitoje insists the Super Eagles have lost their fear factor on the continent.
Nigeria take on Egypt in a Gabon 2017 Africa Cup of Nations qualifying double-header next month on the back of the team’s exit at Rwanda 2016 African Nations Championship at the group stages last month.
And Nigeria coach Sunday Oliseh  has come under heavy scrutiny after the Eagles managed to win just one game in the tournament meant for players playing their trade in their countries’ football leagues.
The beleaguered coach is fighting to save his job after labelling his critics “insane” – and claiming some reporters demanded bribes from him to “write positive stories”.
But former Nigeria defender Semitoje, who expressed his disappointment at the development, says the Eagles must work for victories  if they are to again strike fear into their opponents.
He lamented the continuing uncertainty surrounding Oliseh’s job ahead of the crucial two-legged fixture against record seventh-time African champions Egypt.
“I’m disappointed that Nigerian football is not developing,” the former Algiers ’90 Africa Cup of Nations silver medallist told our correspondent on the telephone.
“Teams no longer fear us on the continent because of the problems in our football.
“In fact, smaller teams believe they can beat us, because we have lost our fear factor.”
The Denmark-based coach added, “We must put our house in order if we want any team to fear us. We are not guaranteed victory against Egypt because our team lacks motivation. I believe we will beat them.
“I read somewhere that our players have not been paid their win bonuses and other allowances. And the coaches are being owed salaries. It’s a shame!”
The former Iwuanyanwu Nationale captain called for support for the national team ahead of the games against the Pharaohs.
Semitoje added, “The government or the Nigeria Football Federation must fulfil their promises to the players. We suffered the same fate in our days.
“We were promised houses for winning the 1994 Africa Cup of Nations in Tunisia, but those of us who chose to have our houses in Lagos have yet to be given.
“Thompson Oliha was always talking about the issue before he died three years ago.”