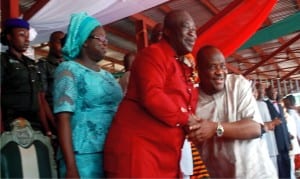 The Chairman of Arewa
Consultative Forum, ACF, and former Inspector General of Police, Ibrahim Coomassie, has said that agitations for a new Republic of Biafra by Igbo youths were based on “long emotions,” which were “short on logic.”
Coomasssie spoke at Nsukka while accepting the conferment of honourary Doctor of Public Administration, DPA, on him, by the University of Nigeria, UNN,
“While I am not trying to put any one on the spot, you will agree with me that these allegations (of marginalisation against the north) have been around for many years. Yet, like all allegations made by angry people, they are long on emotions and short on logic.
“The problem of Nigeria has nothing to do with its size, diversity or attempt by any group to marginalise other nationalities. As was succinctly put by the late great literary giant, Chinua Achebe, the trouble with Nigeria is simply and squarely the failure of leadership.
“For one thing, we have paid a heavy price fighting a bloody civil war in which over a million people lost their lives. “Even a bitter enemy of Nigeria would not wish that we go through what always attended the process of breaking up a country.
“My attention was drawn to the fact that in allocation for capital projects in this year’s budget, the South-West and South-South under a northern presidency have more than the three northern zones combined. “Yet, no one is crying of marginalisation.
“From 1999 when democratic governance was restored to today, trillions of Naira have poured into these states and local governments from the federation account. If no developments have taken place in my state or local government, shouldn’t I first of all, query those running the affairs of my state or local government? “President Muhammadu Buhari is no miracle worker … but with the enthusiastic support and cooperation of all Nigerians, especially the youths, who should have no difficulties embracing positive change, we are today poised to witness extraordinary reconstruction of Nigeria.”