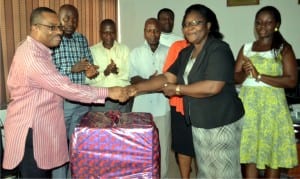 Barely two weeks after the
Rivers State Governor, Chief Nyesom Wike, charged the management of Nigerian Agip Oil Company (NAOC) to expedite action on the rehabilitation of the Agip Junction to Agip Operational Headquarters in Mgbuoshimini, Obio/Akpor Local Government Area, work on the road has been completed.
On February 2, 2016, the Rivers State Governor, Chief Nyesom Wike, had during an audience with the management of NAOC, made the charge, and said that security measures taken by his administration have improved across the state, urging NAOC to improve its commitment to Corporate Social Responsibility to its host communities.
But speaking to The Tide in an interview in Port Harcourt, Okmas Nigeria Limited, the construction company handling the Agip Road rehabilitation project said that the phase I of the work from Mgbuoshimini Junction to Shandees’ Fast Food has hit 100 per cent completion.
The Public Relations Officer of the company, Mr Ebere Ohwondah, said that the remaining part of the work was part of the second phase, and added that his company was also ready to deliver the job once approval has been granted for commencement of the second phase by NAOC management.
Mr Ohwondah said that since the work started, the NAOC has been monitoring the quality of work done, and had expressed satisfaction with the work done so far, especially with the good drainage system to take care of flooding during the rainy season, and hoped that the second phase from Shandees’ to the Ikwerre Road Flyover would be approved as quickly as possible so that work would commence in earnest.
Mr Ebere further stated that there has been no challenge as both the NAOC and its host community were cooperating with workers on site; and hoped that the second phase of the road rehabilitation work would be completed before the rainy season sets in.
A motorist, Mr Anthony Nkoro, expressed satisfaction with the efforts of Agip management to rehabilitate the strategic road, that links Eagle Island, Mile Three and Agip Ada-George. He said the gesture will alleviate the sufferings of the road users.
Also, a pedestrian, Mrs Blessing Victor, said she was happy with the on-going work on the road, adding that God has remembered residents of the area.
She pleaded with the NAOC to include street lights, so that the area can experience a phase lift, while checking criminal activities, especially at night.
When The Tide called for comments by the Public Affairs Officer of NAOC, access to the company’s premises was denied.
Further attempts to get the Agip spokesperson on phone were also rebuffed.
However, The Tide investigation show that Okmas has as at  last Friday, withdrawn its construction equipment from the site of the project, apparently in response to the delay by Agip management to approve the second phase of the project.

A new Controller of Rivers State Correctional Centre, Felix Lawrence, has assumed duty in Rivers Command following an administrative reshuffle within the Nigerian Correctional Service (NCoS) nationwide.
This is contained in a statement made available to newsmen, the Command’s Public Relations Officer, DSC Juliet Ofoni.
According to the statement, Lawrence took over from the Assistant Controller General of Corrections, Alex Oditah, on June 24 at a handover ceremony in Port Harcourt.
The statement added that Oditah had similarly been deployed as Desk Officer ACG Restorative Justice at National Headquarters, Abuja.
It also stated that Oditah, at the occasion, urged all staff to give the new Controller the maximum cooperation to achieve “necessary positive change and the mandate of the service’’.
Oditah also expressed appreciation to staff for their diligence to work, adding that he appreciated any action taken to move the State Command forward.
Also, Controller Felix Lawrence, at the occasion, thanked God and the Controller General of Corrections, Haliru Nabab, for his posting to Rivers Command.
He urged all staff to give him maximum cooperation, adding that truancy would not be tolerated.
The statement added that Lawrence had served successfully in various capacities, including State Headquarters, Lagos Command, and State Headquarters, Asaba, Delta.
He also served at Medium Security Custodial Centre, Shendam, Plateau; Medium Security Custodial Centre, Kuje; Medium Security Custodial Centre, Kano; and Medium Security Custodial Centre, Ikoyi.

Woji Community in Obio/Akpor Local Government Area of Rivers State, yesterday, unveiled three vehicles to kick-start its transport company.
The community also conferred chieftaincy titles on a former chairman of Andoni Local Government Area, Hon. Orom Nte Ereforokuma; Mr Ani Anthonio Onu and Engr. Andrew Aligbe.
Unveiling the vehicles yesterday during the thanksgiving service at St. Nicholas’ Anglican Church, Woji, to mark his seventh year anniversary as paramount ruler and Nyenwe-Eli Woji, Eze Emeka Ihunwo, said the community set up the transport company to generate funds for community development and provide employment for deserving persons.
He announced that the fleet of three Toyota Sienna vehicles would be integrated into the transport firm floated by the Diocese of Evo, Church of Nigeria for easy management.
He highlighted several development projects executed in the community since his coronation seven years ago to include scholarships to indigent students, manpower development programmes for the youth, and support for indigent women of the community, among others.
Speaking while dedicating the cars, the Bishop of the Diocese of Evo, Church of Nigeria (Anglican Communion), Rt. Rev. Innocent Ordu, commended Woji community for its sense of unity and for setting the pace in community development since Eze Emeka ascended the throne of Eze Woji.
He urged neighbouring communities top borrow a leaf from Woji to ensure peace and development in their areas.
He prayed for God to sustain the leadership of the community and grant them the wisdom to continually maintain peace and development of the community.
In his sermon, the Vicar of St. Nicholas Anglican Church, Woji, Rev. Canon Kingsley Ohajianya, called on the people to put their trust in God always to ensure their unity and progress.
The cleric, who spoke on the topic “Obtain Help from Sanctuary” during his sermon, said God does not fail those who put their trust in him as the only place one can get help is from God.
The man of God said nobody should go to the occult world to seek for help as any power outside God has expiry dates.
On Saturday, Eze Emeka Ihunwo had conferred chieftaincy titles on three non-indigenes of the community. He conferred the title of Eze Chituru of Woji on Orom Nte. Ani Anthonio Onu was conferred with Eze Obanya obi of Woji while Engr Aligbe bagged Eze Chigozilemma of Woji.
Eze Woji charged the awardees to be good ambassadors of Woji Kingdom, adding that the kingdom does not sell its chieftaincy titles but will give to deserving persons who have excelled in their contribution to the development of the community.
Ihunwo said it has been the custom of woji to recognise non- indigenes living with them, adding that even foreigners have in the past been recognised awarded titles.
He said the community has also extended its scholarship programmes and employment opportunities to non-indigenes in the community, and urged others to reciprocate same in their communities as no community can be built by only indigenes.
He urged the inducted chiefs to build synergy with the community with a view to fast tracking its development and charged them to take the titles as one of those good fortunes of life.
The awardees who spoke to newsmen thanked the Paramount Ruler and the Woji Council of Chiefs for the honour, promising to remain law-abidding as well as support the development of the community.

Acting Vice Chancellor of Ignatius Ajuru University of Education (IAUE), Prof. Okechuku Onuchuku, has called on tertiary institutions in Nigeria to move away from the principles of “publish or perish” and focus more on research results and outcomes that would attract industries for funding.
Onuchuku gave the advice recently when he received the Local Organising committee members of the Fifth Annual International Conference of the Society of Agriculture, Environmental Resource and Management (SAEREM) on a courtesy visit in his office.
Noting that the outcomes and results of such research would not only solve societal problems, but also help the university to generate funds from its commercialisation and capitalisation, the Acting VC said “industries and private individuals that invest in such research project would also reap from their investment with government regulating”.
He encouraged lecturers to make their research work visible for citing, emphasizing that such activities would increase the popularity of the scholar and the rankings of the University.Onuchuku commended the Committee for making IAUE their choice destination for the forth-coming conference with the theme, “Impacts of Climate Change and Oil Pollution on Environmental Resources, Food Production, Biodiversity and Economy Growth”, stressing that the conference would provide avenue for cross fertilization of ideas and showcase the institution.
He also stated that participants would gain from the interactions and presentations that would enhance their academic growth.
The Chief Executive hinted that the agricultural sector remains the largest employer of the labour force in the country and encouraged the Committee to come up with ideas, best practices and break-throughs that can improve food production, promote sustainable food solution, increase food security and eradicate hunger and poverty.
Earlier, the Chairman of the Local Organising Committee of the Fifth Annual International Conference of SAEREM, Professor Godfrey Kalio, expressed appreciation to the Vice Chancellor for the support towards the hosting of the conference, saying that the conference would impact globally on the rankings and visibility index of the University.
In his vote of thanks, Dr. John Chukwumati of the University of PortHarcourt thanked the Vice Chancellor for the opportunity to visit.