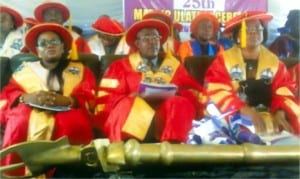 Amidst cries of hike
in fees for registration for the 2016 West African Examinations Council (WAEC) examination, the Permanent Secretary of the Rivers State Ministry of Education, Dr Patricia Ogbonaya says any increase in the fee above N15,000 is illegal.
In an exclusive interview with The Tide in her office, the Permanent  Secretary stated categorically that the exact amount required to register for WAEC is about N11,000.
“The actual amount is about N11,000 and something, but put it at N15,000 to take care of administrative costs and everything, which include monitoring of examinations.
“This amount includes the amount added by the Ministry of Education. On top of the WAEC fee, we do not have more than N3,000,” she explained.
Confirming the approved WAEC fee, the Zonal Co-ordinator of WAEC in Rivers State, Mr Humphrey Ubaka said the official amount required for registration is N11,795.00.
While also confirming complaints of a hike in WAEC fee by principals, Mr Ubaka hinted that having announced the actual amount, it is left for parents to be guided by it.
“Any candidate that is paying outside what is supposed to be paid knows why he/she is paying such amount . The school must have assured them that they are going to write for them,” he said.
The Tide’s investigations revealed that some principals charged as much as N20,000, for the WAEC fee and N5,000, for what they claim was added by the Ministry of Education .
Further investigations revealed that while most parents/guardians complained about hike in the WAEC fee, none of them had been able to provide evidence of such hike  because receipts were not given them to reflect the increase by the principals or school authorities involved in the increase.
Meanwhile, the Acting Provost of Rivers State College of Arts and Science (RIVCAS), Dr Samuel B. Kalagbor has refuted claims that the institution’s Niger Delta Science School (NDSS) Charges as high as N100,000 as WAEC fee.
That is untrue, malicious, and mendacious. When people have information, it is important that you go to the appropriate authority to find out  it is unthinkable that an institution will charge over N100,000 as WAEC fee,” he  said.
Dr Kalagbor explained that “what actually happened was that because of the experiences of the past, for Senior Secondary School (SSS) III, we make them pay all three term fees in addition to the WAEC fees, which amounted to N148,800.”
A breakdown of this amount, shows that each of the three term fees is N38,600, while the WAEC or NECO fee is N33,000.

Provost Wants Matriculants To Be Committed To Studies