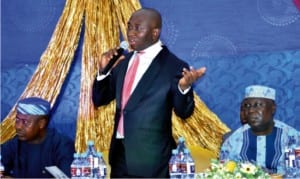 Residents of Enugu me
tropolis were  thrown into apprehension, over the discovery of an unexploded device, believed to be a bomb at a building site near the state House of Assembly.
The development caused  tension among residents, who thought the device may have been planted by the deadly Boko Haram insurgents.
Workers at the building site who discovered the device, were said to have fled the place after alerting the police.
Reacting to the development, the  Enugu State Police Command in a statement issued by its spokesman, Ebere Amarizu, said there was no cause for alarm over the incident, noting that it was an unexploded device abandoned during the civil war.
He said that “the Nigeria Police Force, through its operatives of the Explosive Ordinance Department, also known as Anti Bomb Unit has recovered successfully from a building site an unexploded ordinance, otherwise known as ‘UXO’, being part of the civil war left overs, buried on the ground in the war affected areas.
According to Amarizu, “The object was recovered from the building site located around NTA Hostel axis of Ogui in Enugu on 13/2/16 in the afternoon by the builders as they were working at the site.
“It was further gathered that the builders on sighting the suspected object, promptly alerted the state police command operatives, who also arrived promptly at the scene for the evacuation of the unexploded ordinance.”
He added that “the area has been rendered safe by the Explosive Ordinance Department operatives as the builders are busy doing their construction at the site.”
The Command spokesman, recalled that the state police command, through its Public Relations Department had been sensitizing members of the public “on the need not to tamper with UXO when found either during farming, road and building constructions, amongst others, but to promptly alert the state command operatives or the nearest police station, so that operatives can come and evacuate the object and render the area very safe with their equipments.”