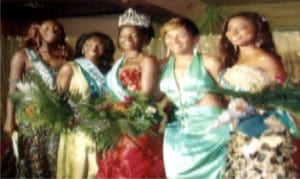 So much love is already in
the air as residents of Port Harcourt City and its environs are leaving no stone unturned as they look forward to celebrating this year’s St Valentine in grand style come Sunday, February 14, the day is set aside to celebrate the true essence of Love all over the world which St Valentine’s day represents.
To ensure a successful, funfilled celebration, most families have mapped out strategies to pamper their loved ones with gifts, affection, eating and drinking at their various entertainment outfits within and outside the oil rich city.
Our investigations have shown that show biz personalities and operators of various entertainment outfits in the city have made serious preparation to give lovers, fun seekers, families and friends a swell time.
It was discovered that most of the popular outfits have been refurbished and well equipped with exotic drinks of all brands, mesmerising lightening systems and other state of the art facilities, ambience and enabling environment to give their customers maximum fun and relaxation.
The side attractions in most of the popular joints include professional dancers, artistes comedians and Disc Jockies ( DJs) who play both the old and new school songs to create an all round satisfaction for all classes of customers.
Among the popular joints, night clubs, Restaurants, eateries, ice cream stores and cinemas include: Chinese restaurant. Aba road, Jevenick place GRA, Kilimanjaro Aba road, Sammies, Mr Biggs etc, the cinema houses are Silver Bird, Genesis Deluxe and the film house cinemas, while the night clubs include Casablanca, Boomerang, Oxygen among other popular entertainment enclaves and hospitality out lets.
In an interview with some of the residents and operators of entertainment hangouts, it was found out that they are all excited  and want to celebrate the valentine’s days in grand style.
According to the Group General Manager Night Clubs, Afrique Hotels Limited Port Harcourt, Prince Victor Ifeanyi Mini, Valentine is like any other day in the sense that every day is a celebration of life.
He however, noted that St. Valentine’s day is special because young couples, families friends and well wishers see the celebration as an opportunity to share love and affection as well as thank God for his mercies and blessings.  He disclosed that in the spirit of this year’s Valentines, his night clubs located at various parts of the city now wear new looks as they have been refurbished to create a conducive  environment for their numerous customers to relax, listen and dance to good music as well as wine and dine.
While maximum security has also been provided”.  It is going to be fun all through the celebration without moment, he said.
Also speaking, a Port Harcourt based popular comedian, Mr Ubi Emmanuel, popularly known as Rugged Pastor, observed that Valentine day is a time we celebrate, appreciate our loved ones and he would be cracking jokes at a comedy show free of charge as a way of giving back to the society that has made him. “Just like I always do every festive period whether Christmas, Easter, Valentine or new year celebrations.
I always organise a show to make people happy, so this Valentine I am putting up something which is going to be free as usual, he said.
He disclosed that two events have been slated for the celebration, the first show is tagged” Valentine  Friday Nite Bash” on February 12, at the Pentagon for soldiers who were forbidden to marry and for ministering to Christians who were persecuted under the Roman Empire during his imprisonment.
He was also said to have healed the daughter of his Jailer Asterius.  It was stated that before his execution he wrote, “From your Val” as a farewell to her.A

Afrobeats songstress, Tiwa Savage has been unveiled as latest brand ambassador for a popular smartphone brand.
Before her official unveiling, the smartphone had teased its followers to guess who their latest ambassador by sharing a foggy image of the singer.
Officially welcoming her to their fold via its Instagram, as their ambassador for ‘Camon19Launch’, Tecnomobileng wrote: “Queen of Afrobeats! Mama Africa! Multitalented singer! Superstar extraordinaire and confirming the news in the comment section, the “Koroba” singer wrote: “The sexiest phone ever.”
Taking to her social media pages, Tiwa announced to her fans that she is the newest brand ambassador for smartphones.
Sharing an advert snippet of the brand, Tiwa wrote: “This one is highly approved by the No1ABG, Your girl is on board with one of the coolest brands ever – TECNO!

The Nigeria Police has ordered a Nigerian singer, Habeeb Okikiola, popularly known as Portable, to report himself over a viral video.
The Tide source reveals that Portable was seen in a viral video accusing a young man of sending a message to his ‘wife’, asking her to advise him to stay away from his friends for they had no glory.
In the video, the ZaZu Zeh crooner asked the young man to name his friends whom he was accusing of having no glory.
Without allowing his victim to say a word, the singer asked his boys to beat the helpless guy.
As they pounced on the victim, Portable was heard in the Yoruba language, saying “e luu pa”, that is, “beat him to death.”
Reacting, the Portable was asked to report to the Ogun State command as the incident happened somewhere within the state.
The Ogun State police spokesperson, Abimbola Oyeyemi, while describing the act as unbecoming and barbaric, asked the singer to surrender himself or be declared wanted.
“The attention of Ogun State Police Command has been drawn to a video clip circulating on social media, where a popular hip hop musician, Habeeb Okikiola (a.k.a Portable, the Zazu crooner), was seen organising some youths to beat up a young man and inflict bodily injury on him. The incident was said to have taken place somewhere within Ogun State about two days ago.
“Such unruly and violent behaviour is not only barbaric, but unbecoming of somebody who is supposed to be a role model for the youths and therefore should not be tolerated.
“In view of this, the Command is using this medium to advise Okikiola Habeeb, a.k.a Portable, to report himself at the nearest police station in Ogun State, failure of which his arrest will be ordered.
“The flagrant display of impunity by Portable in the viral video is condemnable and if not checked, it will send a wrong signal to the youths who are looking up to him as a role model.
“Jungle justice has no place in our laws and whoever embarked on it must be made to feel the weight of the law, no matter the status of such person,” Oyeyemi said. statement on Monday.

Nigeria’s Afrobeat superstar, David Adeleke alias Davido, who is currently on a North American tour labelled: “We rise by lifting others”, which began on June 16, at Brooklyn, New York, has made N144.5 million from the sold out ticket sales from History-Toronto, and House of Blue in Boston.
Figures released by SeatGeek showed that the award-winning singer’s tour tickets were generally sold for as little as $41.00, with an average price of $74.00. Davido made $185,000 (N76.8m) and $162,800 (N67.6m), totalling N144.5m based on an average ticket sales rate of N415.37 and the capacities of History (2,500) and House of Blues (2,200), according to BusinessDay.
Reports indicate ticket purchasers would go online to search for ticket prices using sites such as SeatGeek’s Deal Score Function which ranks tickets by value and shows buyers how good a deal they are getting when purchasing tickets.
While speaking with Trevor Noah, the daily show on the tour, Davido stated that his main aim of the North American tour was to showcase Africa in its entirety and to carry everyone along, especially Africans.
Award winning Nigerian singer, Davido Adeleke, has offered full scholarship to Suleyman, a young boy who got parallel A1 in WAEC exams.
Despite getting such an impressive result, Suleyman has been sitting at home due to lack of funds to sponsor his education at the tertiary level.
Fortunately for him, Davido heard about his condition and has promised to sponsor him through school and also take care of his allowance and accomodation. Davido tweeted: “We have contacted Suleyman who lives in Ghana and he has been given a full 4/5 year scholarship to Adeleke university.. accommodation and allowance included ! God bless y’all ..”