The Rivers State Government has directed the management of Nigerian Agip Oil Company (NAOC), the Italian oil giant, to effect immediate clean-up of Egbema communities impacted by the Ebocha oil centre explosions that occurred last July.
The Rivers State Commissioner for Environment, Prof Roseline Konya, who gave the order during a parley between the Ministry’s officials, Egbema communities and representatives of Agip, said that Agip can not claim that the triple explosions spanning across two days did not negatively impact or pollute the environment, adding that all prospecting oil and gas companies operating in the state must be environment friendly and responsive to their host communities.
The commissioner explained that the issue of compensation will not be addressed for now pending the clean-up exercise, and gave the oil firm three-month timeline to clean-up and remediate the environment and communities affected.
Konya appealed to the impacted host communities to co-operate with the firm during the clean-up process.
She promised that the ministry will meet with all the parties and stakeholders in three months’ time to review the progress and agree on nest line of action.
Earlier, the chairman of Egbema Technical Committee, Josan Osai, who described the relationship between Agip and Egbema communities as a metaphor of mother and child, had lamented how Egbema (as a mother) nurtured Agip (the child) to adulthood only for the child to abandon the mother after stabilizing.
Osai recalled that the triple explosions from the Ebocha oil cnetre that rocked the area left the entire environment devastated, affecting flora and fauna while buildings, livestocks, rivers, streams, fish ponds, pools among others were severely impacted.
He blamed the explosions on equipment/facility failure as, according to him, Agip had 24-hour security/surveillance around the area of explosions, which was fenced and tagged a “no-go area” from non-Agip personnel.
Osai disclosed that host communities had severely dialogued with Agip, which involved the state House of Assembly, Rivers State Police Command and National Assembly but regretted that such parleys were deadlocked when Agip sidelined Egbema and signed the Joint Inspection visit report without the consent of the landlords.
Also speaking, the leader of Agip team, Dr Kingsley Opuene Aston, who doubles as the Manager, Environment Department, said that the company’s position was that the explosions were as a result of sabotage, adding that the company cannot be held liable for the incident.
Aston further said that some remedial measures had been effected within the site of the blasts while relief materials had been sent to host communities to cushion the effect of the disaster.
He, however, stated that the resolution of the meeting will be transmitted to Agip’s management for further action and directive.
It would be recalled that series of meetings and dialogue had been held between host communities, Agip, state House of Assembly, National Assembly and police authorities as well as Rivers State Ministry of Environment since the triple explosion that happened last July. 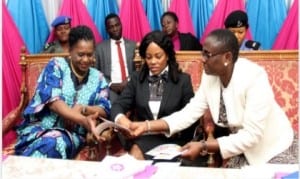 No Amnesty For Corrupt Public Officials In Rivers -Tam-George