The Governor of Rivers State and winner of the Supreme Court judgment over the governorship elections in the April 11,  2015 elections, Chief Nyesom Wike, has extended hands of fellowship to the All Progressives Congress (APC) candidate, Dr Dakuku Peterside and other members of the opposition party.
Wike, in a state-wide broadcast on Wednesday shortly after the Supreme Court upheld his election, said all parties need to come together to move the state forward.
In the words of the governor, “now that the battle is over’ the interest of Rivers State should be primary in consideration and action.”
He added that the responsibility of moving the state forward is the responsibility of all leaders irrespective of party affiliation, assuring them that none of those who fought him and in the opposition will be excluded in the governance of the state, since there is strength in unity.
The governor while admitting that the marathon legal tussle had affected the development of the state, however, pointed that he will not be deterred as the time has come for all hands to be on deck to move the state forward.
Part of the quest he said is to further drive the New Rivers Vision, which goals are to foster responsible and egalitarian government whose foundation is guided by the fear of God.
The governor, however, dedicated his victory to God almighty and Rivers people, whom he said, had supported his administration through prayers and encouragement.
He commended residents of the state and all men of goodwill for standing with the government during trying times, while acknowledging the support of religious, traditional leaders, chiefs and elders, including young men and women.
According to him, the judgment has reaffirmed the confidence in the independence of the judiciary as the last hope of the common man.
Wike also commended the entire leadership and membership of the Peoples Democratic Party (PDP) for their unflinching support believe in the final triumph of the rule of law.
Meanwhile, reactions have continued to trail the Supreme Court judgment, with the Sole Administrator of the Greater Port Harcourt Development Authority (GPDA), Barrister Desmond Akawor, describing the judgment as having restored the lost glory of the judiciary in Nigeria.
Akawor said the good works of the governor will be sustained by the judgment, adding that, “never again will Rivers State go back to where we were before”.
Also speaking, state Chairman of National Association of Democratic Lawyers in Rivers State, Barrister Nabolobari Nazigelue while congratulating Wike, lauded both APC and PDP for their recourse to the rule of law.
Nazigelue, however, suggested that the judgment has underscored the need to create uniformity in the electoral laws, while submitting that in the future all cases, including those of the National Assembly should also be allowed to be determined by the apex court.
Meanwhile, the Rivers  State  Governor,  Chief Nyesom Wike, has  declared  that  the  Judiciary is the only hope of the country, if the judiciary  crumbles the  nation  is gone.
Speaking  when the  National Working Committee of the Peoples Democratic Party (PDP), led by the Acting National Chairman, Prince Uche Secondus paid him a congratulatory visit, yesterday, at the Government House, Port Harcourt,  Wike  said that the Supreme Court  passed judgment  based on the constitution, while the lower courts aired opinions in the Rivers State Governorship election.
“The Supreme Court is the only hope we have in the country. There if the judiciary crumbles, the nation will crumble. The tribunal aired her opinion, the Appeal Court aired her opinion while the Supreme Court delivered judgment based on the constitution and the Electoral Act”, Wike said.
He said that the people of Rivers State remain confident in the ability of  the  Judiciary  to do justice.
The governor noted that Rivers State  will remain a PDP  state as the party is part of the political  life of the state which cannot be  easily erased.
Wike assured  the leadership  of  the  PDP  of his support and that of Rivers State to ensure the resolution  of  the  party’s  challenges  and  set it on the path of recovery.
“As a party in opposition,  we must put our house in order, so that within the shortest possible  time, the PDP  will return  to  power at the Federal level “, the governor said.
Earlier, Acting National Chairman of the PDP, Prince Uche Secondus, congratulated Wike  on his victory, and described  the  Supreme Court judgment  as a landmark  ruling which will positively  affect  the country  and the political  arena.
Also speaking,  the Secretary  of  the  Board of  Trustees of  the  PDP, Senator Jubril Wakil, said that the judgment  of  the  Supreme  Court  affirmed the will of the  Rivers State. 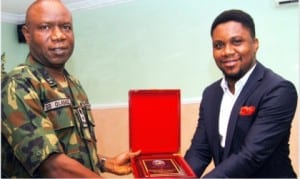