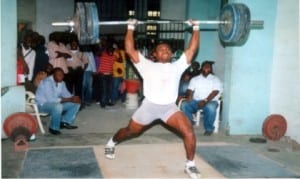 A weightlifter in a training session

Super Eagles Coach, Sunday Oliseh, had raised alarm over the welfare of his players ahead of yesterday’s CHAN Group C against Guinea, warning that his team might “break down” as they were yet to be paid bonuses in Rwanda.
Oliseh made sure he did not mention that his team are owed bonuses and allowances, but implied this during a press briefing in Rwanda.
He said: “my players are working under extreme duress, it’s like driving a car with an empty tank,I won’t go into details. Let’s just hope we don’t break down.”
The Nigeria Football Federation (NFF) have been hit by a serious cash crunch, which has meant they have not been able to meet up some of their financial obligations.
Nigeria needed a point from yesterday’s final group game against Guinea to qualify them for the quarterfinals against either Mali or Zambia but fell 0-1 to book a flight home.