First, it was #VisitOfHope
held on Friday, 27th November, 2015; a special roadside visit to entrepreneurs with disabilities within Port Harcourt metropolis as part of Rugged Steps Foundation’s pre-activity project for public sensitization on issues surrounding disabilities as well as showcasing several unique abilities.
We also used the #VisitOfHope project to build contents as we unveiled the 1st indigenous TV show for persons with disabilities tagged “Uniquely-Able.”
The unveiling was done at the charity event held recently.
It was another wow Sunday on the 20th of December, 2015 at the Hotel Presidential,  Port Harcourt,  where Rugged Steps Foundation, a leading disability non governmental organisation with headquarters in Rivers State, at the forefront of trainings,  advocacy,  promoting the dignity,  well-being and welfare of persons with disabilities,  had in attendance over 1,500 guests with representatives of persons with disabilities drawn from the LGAs in Rivers State.  It was a celebration event, charity concert with renowned music artistes and comedians to support people with special needs.
We gave welfare handouts to over 700 persons with special needs,  mobility aids were given to over 40 persons with disabilities especially those with critical disability cases.
These aids were provided by Nigeria LNG Limited as part of their support toward this noble cause.
Other sponsors include: The Tide Newspaper,  Independent Monitor Newspaper, Hotel Presidential,  Sambass Films, Omas Studio,  Motion Plus,  Emmabest Studios,  ED-Anderson,  Sisters’ Fellowship International – Diamond Golden Winning chapter,  Wave 91.7FM, Rhythm 93.7FM, CoolWazobiaInfo, RCCG Rivers Province 2 & 4, RSTV,  FACE Magazine, Supreme Magazine, KEL Technology,  Pabod Breweries,  Adpack Nig. Limited, among others.
We look forward to the support of well-meaning Nigerians so as to sustain the recently unveiled “Uniquely-Able” TV show, and, Special Training & Empowerment of Persons with disabilities. We also look forward to the sponsorship of the 8th Port Harcourt Christmas Charity Concert/Awards-2016. We have commenced the planning already, and we hope to hear from you soonest. 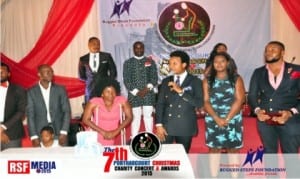