Rivers State Gover
nor, Chief Nyesom Wike is committed towards ensuring that students of the state origin in tertiary institutions are paid bursary.
The State Commissioner for Education, Professor Kinaye Ebeku, made this known on Wednesday during his familiarisation visit to the Rivers State College of Arts and Science (RIVCAS).
Professor Ebeku, who was responding to challenges faceing  the  institution as outlined by the Acting Provost of the school, Dr. Sam Kalagbor, emphasized on the commitment of the Governor towards ensuring that students are paid bursary.
He stated that his ministry is already in talks with the leadership of the national union of Rivers State Students (NURSS) over the payment of bursary to their members.
Ebeku, however, pleaded with the students to appreciate the dwindling financial resources of the state, even as the governor is committed to developing  the state in all ramifications.
“He (Governor) has committed to the payment of bursary to the students in his blue print. Commitment is one, having resource is another thing. That is what you need to appreciate.
“If the resources are available, bear in mind that the governor will do as he has committed. He is very passionate about his words and his promises” the education boss said.
Earlier in his speech, the Acting Provost had appreciated the efforts the Governor has made in order to develop the school, including the release of N30 million to enhance accreditation of more programmes in the school.
Dr. Kalagbor, however, noted that other criteria for the accreditation of more programmes include more development in the area of infrastructure and facilities.
He used the opportunity to appeal to the state government to ensure that capital allocations to the institution are not only fixed, but also released at the appropriate time. 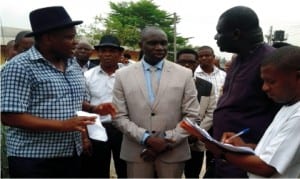 (From Left): Chairman of the 8th Governing Council of Ken Saro Wiwa Polytechnic, Adokiye Amiesimaka, explaining a point to Rivers State Commissioner for Education, Prof. Kinaye Ebeku, while the Acting Rector of the school, Dr. Onengiyeofori M. Georgewill watches, during a familiarisation tour of the school by the Commissioner. Photo: Sogbeba Dokubo.

The Vice Chancellor, University of Maiduguri, Prof. Aliyu Shugaba has said that the institution has engaged in a Research and Innovative programme to develop devices to tackle insecurity challenges in the campus.
Shugaba who revealed this at a forum in Abuja, Yesterday, said the innovative idea became imperative following the devastating effects of insecurity in Borno and its environ.
Shagabu said the university was working with some relevant stakeholders in the area of research and development to provide an enabling environment for effective academic activities in the institution.
He said “ in recent years, we have started recording success in research; we have recorded about five patents and we have breakthrough in registering the patents.
We are now looking at the commercialisation of them”According to him, one of the patents was in veterinary medicine; a kind of ointment that could be applied for the treatment of some animal diseases. “The other one is in the area of telescope that will allow someone to view certain things from a far distance. Another one was in the area of engineering”, he stated.
The Vice Chancellor said the university had received some awards as a result of its achievements in research. Speaking on incentives, Shagabu said there were no specific incentives to motivate the staff to work except “the visiting lecturers whom the university gives 75 per cent of their salary.’’ He, however, said that in spite of the security challenges people were still taking up jobs in the region except those that were not from the region.
According to him, Maiduguri is the safest place in the country irrespective of the security challenges and urged Nigerian students to go into whatever field of study they had passion for even in the university and harness the opportunities in the areas, saying “there is no single course that one will study and will not find use for it.” Shugaba said that all the programmes in the University of Maiduguri had gotten full accreditation from National Universities Commission (NUC) except “Civil and Water Resources Engineering”.
“But we are trying to remedy it, we have put in enough resources; we have injected about N200 million through the appropriation budget and the Borno State government has also injected some facilities”.

Federal Government has said that the poor management of funds allocated to tertiary institutions, especially polytechnics and colleges of education, remained the major challenge of the Education sub-sector.
Minister of Education, Adamu Adamu, who stated this while inaugurating governing councils of new eight federal polytechnics and six federal colleges of education, also warned council members against corruption and interference in the day-to-day operations of the institutions.
He said: “Poor management of funds remains a major operational constraint in the sector. It is expected that the limited funds allocated by government should be judiciously utilised.
“Also it is evident that government cannot provide all the funds required to run polytechnics and colleges of education, councils should think out of the box and endeavour to generate more revenue, outside government allocations.
In this regard, councils should enlist the support of philanthropic organisations, individuals and other sources of revenue through an endowment for additional funding of their institutions,” he said.
Adamu warned that President Muhammadu Buhari would not hesitate to dissolve any council found to be corrupt and/or incompetent, noting, however, that with the calibre of men and women being inaugurated, “I am hopeful that he would have no need to exercise his powers in this regard.”
The minister urged the councils to respect the principle of federal character in the appointment of members of staff, stating that some institutions have become parochial and primordial enclaves, with the concept of universalism in education  jettisoned, especially in matters regarding staff employment.
He  charged members of the councils particularly to work with the Federal Character Commission to ensure compliance.
The minister added that the drive to revamp the quality output of higher education in Nigeria rests on governing councils,  and expressed confidence that they would bring their wealth of experience, adherence to and respect for rule of law and due process, to bear in the discharge of their duties.

Writing of mock examination is henceforth compulsory for prospective candidates of National Examination Council and West African Senior School Examination.
At a meeting of the management of the Ministry of Education and proprietors of private schools in Lokoja, the Commissioner for Education, Science and Technology, Wemi Jones , reiterated the State Education Law 2020.
The Commissioner who was represented at the meeting by the Permanent Secretary in the Ministry, Mr Emmanuel Idenyi, said schools should register and present details of their candidates for Common Entrance and Mock examinations to the Ministry according to provisions of the State Education Law 2020 or be sanctioned.
According to him, “Mock, which is designed to help students prepare for NECO and WASSCE had to be centralised like the external examinations it mimicked; this should be coordinated by the Ministry”.
The Commissioner explained that the guidelines of Kogi Education Law 2020 as approved is not punitive but designed to aid school owners to operate effectively and the Ministry to project and prepare schools in the state to best standards.
He encouraged owners of private schools who had hitherto failed to register with the Ministry to do so immediately as unapproved schools would not be allowed to write external examinations.
He further appealed to private school owners to register with the National Association of Proprietors of Private Schools for ease of administration.
While announcing that four students in the state qualified for the 2022 Olympia National Maths Quiz Competition and would be sponsored to the next stage in Jos by the Ministry, the Commissioner noted that the State Education Ministry had addressed shortcomings of the past and better results were being recorded.