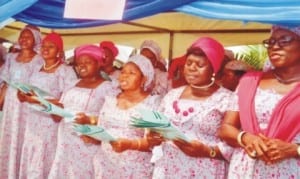 Deputy Governor of Rivers State, Dr. Ipalibo Harry Banigo has described the appointment of Justice A. I. Iyayi-Lamikanra (the most senior judge in the state High Court) as Acting Chief Judge of Rivers State as a progressive development in the state judiciary.
Dr. Banigo, in a statement by her Press Secretary, Paul Damgbor, said the appointment of Justice Iyayi-Lamikanra, another female, by the State Governor, Chief Nyesom Wike has further restored stability and sanctity in the state judicial system in particular and Nigeria as a whole.
The deputy governor noted that the governor’s action has demonstrated obedience to rule of law, Justice, equity and fairness as well as compliance to laid down principles of engagement.
The deputy governor opined that the peaceful transition has again positioned Rivers State as a reference point in Judicial issues, pointing out that the State Government has lived up to its promise of reviving and respecting the independence of the Judiciary and the legislative Arms of Government as enshrined in the Nigerian constitution under the principle of separation of powers.
Banigo congratulated the new acting chief judge on her appointment, urging her to ensure that the peace and stability existing in the State Judiciary are not only maintained but improved upon to justify the confidence reposed in women by Governor Wike to hold positions of trust.
She noted with happiness that the new acting Chief Judge would bring her wealth of experience to bear in the discharge of her duties by sustaining the confidence and stability of the Judiciary Arm of Government.
It would be recalled that Justice Daisy Okocha retired on Thursday January 14, 2014, as Chief Judge of Rivers State after her statutory years in service.
In a related development, the Chairman, Rivers State chapter of the Peoples Democratic Party, (PDP), Felix Obuah has lauded the indisputable disposition and steadfastness of the Rivers State Governor, Chief Nyesom Wike, in respecting due process and rule of law in governance of the state.
The PDP chairman noted that the appointment of the Acting Chief Judge of the state, Hon. Justice A. I. Iyayi-Lamikanra, following due retirement of the immediate past substantive Chief Judge, Hon. Justice Daisy Wotube Okocha, is one among other demonstrable actions of the governor in keeping to the relevant provisions of the Constitution of the Federal Republic of Nigeria and the rules and procedures guiding such appointment.
Obuah said that Wike’s transparency and commitment since assumption of office as governor of the state on May 29, 2015, has restored justice, respect and smote succession in the Rivers State Judiciary.
He hinted that the governor’s action has also prevented undue and avoidable judiciary crisis which was the hallmark of the former administration, expressing confidence that Rivers State courts will no longer be closed, thereby denying citizens and residents of the state access to justice.
“We promised people of the state, and indeed all Nigerians a brand new Rivers State, where the three arms of government will function independently and carry out their constitutional duties accordingly. I am happy that the Governor, Chief Nyesom Wike, has been resolute in keeping to this promise, and assure our people that he will not be distracted or betray the thrust reposed in him as our governor”, Obuah said.
While we congratulate the immediate past Chief Judge of our dear state, Hon. Justice Daisy Okocha, on her uprightness, successful completion of service to the State in that capacity, and retirement from active service, we welcome the incoming Acting Chief Judge, Hon. Justice A. I. Iyayi- Lamikanra, and urge her to continue the good works of her predecessor by ensuring dispensation and efficient administration of justice in the state, he said