Ibibo Community in Akwa Ibom State has urged President Muhammadu Buhari, to appoint an indigene of the state as substantive Managing Director of the Niger Delta Development Commission (NDDC).
A group of concerned indigenes of the area argues that the erstwhile Managing Director of the Commission, B arr Dan-Abia, spent only two years from his tenure before he was sacked.
The leadership of Ibibio socio-cultural group, Mboho Mkparawa Ibibio noted that the Act, which set up the NDDC stipulated that every appointed leadership of the commission will hold office for a tenure of four years, which could be renewed, if necessary.
In an appeal, to President Buhari, the International President of the growth, Mr Monday Etokakpan, and the Secretary Mr James Edet, noted that while the president holds the authority to appoint any individual to manage government MDAs, indigenes from the oil-producing states which include Abia, Akwa Ibom, Bayelsa, Delta, Edo, Imo, Ondo, and Rivers were legally recognized as being board members to pilot affairs of NDDC.
We hasten to state here that we are not particular about the person of Barr Bassey Dan-Abia, as we may never know the reasons behind his replacement before completing the four year term for Akwa Ibom state but we however insist that his replacement should have been an indigene of Akwa Ibom state to allow the state run its fair and due tenure of four years in keeping with the extant law guiding the establishment and operations of the NDDC which had not been amended.
“Akwa Ibom has only utilized two years out of her four years as Barr Dan-Abia was appointed and sworn in December 2013. He was relieved of this appointment in December 21, 2015 and replaced by someone from Rivers State.”
Anything short of the above would leave Akwa Ibom State and people with the short end of the stick in a clear violation of the establishing Act in a democratic dispensation.”
The group emphasized the need for the president to permit indigenes of the state to complete the outstanding two year tenure as it is the due process stands.
“While Mboho Mkparawa Ibibio has no qualms whatsoever with President Muhammadu Buhari exercising his prerogative in effecting changes in strategic Ministries, Agencies, Departments, Commissions, and Parastatals as he deems fit in his government, we however have to bring it to the attention of the president that the provisions of schedule 3(1) – tenure of office in the NDDC Establishment Act 2000,” he added. 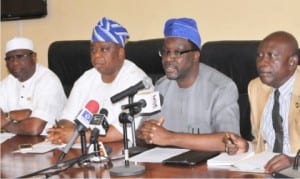