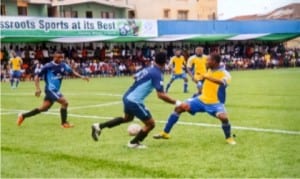 The 2015 edition of the
NNPC/TEPNG Football competition for the  OML 58 host communities in Rivers State, which is the 14th edition has been earmarked for peace and reconciliation in the areas.
This indication was underlined during the opening ceremony of the competition held yesterday at Okah High School, Elele Okinali in Ikwerre local government area.
Speaking in his keynote address, the Executive General Manager, Operations, Mr. Jean-Claude Vachet expressed the Joint venture’s pride to identify with the noble project as part of their commitment to encourage and empower the youth through active engagement and skills training that will promote sustainable socio-economic development.
The football competition is one of the community relations programmes aimed at strengthening unity, peace and love between the company and her host communities and Mr. Vachet described this 14th edition as a special with the theme, “playing for peace, Reconciliation.
Mr. Vachet, who was represented by the Community Affairs Services Manager. Mr Obara Okechukwu, said because of security challenges currently beleaguering the communities, the usual age restriction was kept aside.
“I want to say that this year 16 teams will start the campaign towards one goal of winning the competition. Ubrama and Abarikpo are featured for the first time, both teams are drawn from the Ekpeye Kingdom” Okechukwu said.
He explained that the management of Total E &P Nigeria Limited and their joint venture partners are committed to supporting the annual competition.
The community affairs services manager, used the forum to appeal to all participating teams to make new friends through this tournament.
“I Thank the organizing committee for putting this competition together. I also advise players to respect technical officials, tournament to achieve success” He stated.
Earlier the chairman of the occasion, Chief Omieneokuma Kile, urged the participating teams to use the competition as a platform to foster peace and friendliness in the communities.
“Football is a friendly game, as such I urge you to be happy. I also advice you to take  the game seriously to enable you grow from grassroots to international level” Chief Kile added.
The opening match was between defending champions, Erema United FC, Idu and Ubrama FC.