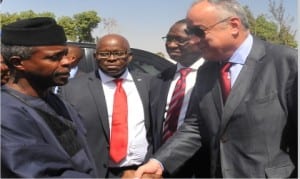 A maritime expert, Mr John Egesi, yesterday advised the Federal Government to review the Cabotage Law in line with the current realities in international trade.
Egesi, a former director in the defunct Nigerian Maritime Authority, gave the advice in an interview with newsmen in Lagos.
He said the law, which seeks to put the control of the maritime industry in the hands of local operators, had not achieved its objectives.
This, he said, was because the industry lacks the ingredients to drive needed growth.
The expert argued that the world had become a global village, pointing out that any law that limits the activities of foreign operators would be deemed to be irrelevant.
“The Coastal and Inland Shipping Law, otherwise known as the Cabotage Law, essentially seeks to stem foreign dominance in the activities of the maritime industry.
“This is with a view to empowering indigenous operators.
“But with the realities in the industry today and the trend in international trade, I do not think the law is still relevant and should, therefore, be reviewed.
“In the first instance, the law restricts the use of foreign vessels in domestic coastal trade but the question is how many vessels do we really have?
“Most of the so called ship owners are just ship owners in name but they are not making any investments in the industry. So how will they operate efficiently?
“Also, the law prescribes the building of ships locally, but as of today, we do not have the capacity to do that.
“As a matter of fact, nobody builds ship entirely anywhere in today‘s world.
“Most of the vessels in use today, even by the core maritime countries like Philiphines, England and China, are built with components from all over the world,’’ he said.
Egesi said that maritime operation was not cheap, adding the present cabotage law could undermine the inflow of foreign capital if strictly implemented.
He said the law, as presently structured, was not suited for Nigeria as it did not have the export edge.
“My suggestion, therefore, is that the government should assemble a team of experts to review the law in line with the current realities.
“They should come up with a new law that will address the problem of local capacity and should not discourage foreign involvement.
“The world is a global village and if we really want to move forward, we should strive to match up with foreign competition.
“This we can do, by putting in place the right local structures,’’ he said.