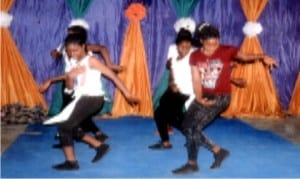 The world Yuletide refers to
the period around Christmas, while Christmas is the time to think about Jesus as a baby in a manger. The birth of Jesus is a special and miraculous event.  The central truth of Xmas is that the child of Christmas is God.  This is why his birth is celebrated on the 25th of December every year.
This year’s Christmas celebration in Rivers State was not only very peaceful, but funfilled, it was marked with prayers, thanksgiving services, sober reflections and funfair.  Although most people in the state celebrated it in a low-key due to financial constraints, others still took time out to patronize their favourite entertainment hang-outs like the   cinema houses, night clubs, hotels eateries and drinking joints with their families, friends and well-wishers.
The Tide’s entertainment investigation revealed that the peaceful celebration was as a result of the first ever Rivers State Christmas carol hosted by the state Governor, His Excellency Chief Barrister Nyesom Ezenwo Wike (CON) with the theme “Hossana 2015” held on Saturday 19th December 2015 at the Yakubu Gowon Stadium Elekahia, Port Harcourt.
The historic event which attracted a mammoth crowd of Christians from different denominations across the state and its environs, is a record breaking gathering built to strengthen the cord that binds the people of Rivers  State by bringing together choristers, citizens and other attendees from every religious denominations across the state, the state Governor and his deputy, Dr Mrs Ipalibo Harry Banigo, members of the state executives council and other distinguished guests from within and outside the state were also in attendance in what has come to be seen as a lofty, commendable and true unity project.
Although the carol had come and gone, the spiritual liberation left behind by the 1000 mass choir and other gospel singers still lingers in the  minds of those who were opportuned to attend the historic event.  It remains a vital part of the Christians worship experience exuding an ambience of bliss and serenity in and around the event venue and leaving a lingering nostalgia long after the event.
With the Amiable state Governor Chief (Barr), Nyesom  Wike and a renowned man of God and special advisers to the Governor of Rivers State on  religious matters and chairman 1st Rivers State Christmas Carol organising committee, Bishop Winston Iwo at the helm of the religious affairs one cannot but expect the best in spiritual liberation of the people.  It is no gainsaying that when the history of this epochal time shall be written, it shall be said that a choir of uncommon singers joined a team of uncommon people to bring about uncommon physical, mental and spiritual transformation of the people of the state.
Commenting on the Christmas carol a member of the Rivers State Pilgrims board and Chairman Local Government Christian Association of Nigeria (CAN) coalition, Rivers State, Rev Peter Wobihiele Georgewill commended the state Governor, Chief Barrister Nyesom Ezenwo Wike for his foresight in introducing the Christmas carol in the state in place of the so-called CARNIRIV.  He said the programme was a right step in the right direction as it had brought the people of the state closer to God instead of the CARNIRIV which did not only distance the people of the state from God, but promoted immorality and idol worship.
The man of God stressed that CARNIRIV also gave roam to satanic activities such as masquerade dancing and other demonic activities that are not in conformity with Christian beliefs.  He noted that the Christmas carol is no doubt a cautious effort by the Wike’s administration to change the ugly trend and bring the people back to God as well as save the state from the reckless and frivolous spending  of huge sums of state revenue all in the name of CARNIRIV, while other important  sectors of the state economy begged for attention.
According to him CARNIRIV was not just a mere conception of showcasing the cultural heritage of the Rivers people, but a deliberate revival of idol worship, sexual perversion and other societal taboos.  This is why all well-meaning people of the state should give kudos to Governor Wike for his timely intervention in saving the state from the cluches of the devil.
Reverend Georgewill who is also the Vicar in charge of St Paul’s Anglican Church Nkpor Village Rumuolumeni in Obio/Akpor Local Government Area of the state also lauded Wike for sending over 600 pilgrims to Jerusalem with all expenses paid even when his detractors thought it would be impossible to do so after they had looted the state treasury.
He said the Governor’s magnamity is unprecendented as he has even promised to increase the number of pilgrims to the holy land in subsequent years.  He therefore called on the people of the stat eto embrace Gov Wike’s Administration because when the righteous rules the people rejoice.
Among the personalities that attended the event included his Excellency Nyesom Ezenwo Wike (CON), Governor of Rivers State, His Excellency Hon Justice Eberechi Surzzette Nyesom Wike, wife of the Governor Banigo, Deputy Governor, Rivers State, Rt Hon Ikuinyi Owaji Ibani, Speaker Rivers State House of Assembly, Hon Justice Daisy Wotube Okocha, Bishop Winton Iwo, Bro Felix Obuah, Chairman Peoples Democratic Party (PDP) Rivers State, members of the Rivers State executive council and other distinguished guests within and outside the state among others.
The gospel groups in attendance included the Mass Choir led by Adonye Omubo Pepple, Niger Delta North Diocese Choir, Music Ministration by Chioma Jesus, Royal Male Choir as well as Rivers State Cultural troupe and a host of other gospel groups.