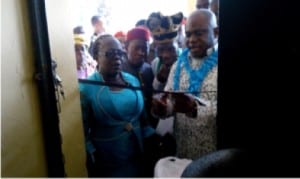 No fewer than 6,000 per
sons have benefitted from Omega Power Ministry’s (OPM) Free School Graduates Scheme in Oil and Gas since its four years of existence.
The General Overseer of OPM, Apostle Chibuzor Chinyere, disclosed this recently at the commissioning of the second phase of the renovation of 12-Classroom Block, Computer Centre with Internet facilities  and Corpers’ House in Ikwuorie Comprehensive Secondary School.
He said many of the beneficiaries who were trained at a pilot centre located at Circular Road, Elekahia in Port Harcourt, Rivers State, had since set up their own oil and gas businesses while several others had also secured employment with reputable firms.
The man of God noted that beneficiaries cut across religious denominations with good number of them Muslims.
Apostle Chinyere further revealed that the scheme which was being bank rolled by the OPM Foundation, also included free training in Computer, driving school, boutique, restaurant as well as a free nursery, Primary and Secondary school in both Rivers and Abia States.
He hinged the secret of OPM’s success on the stoic Obedience to God’s commandment and urged leaders of other Churches to follow suit, stressing that, that was the reason why God established the Church on earth.
The cleric criticized Churches that established academic and other training institutions and made them unaffordable for the poor, describing the practice as tragic contradiction of the tenets of Christianity.
“The underlining truth is that each time we do these, God blesses our members immensely. As God blesses them, they in turn give offerings and pay their tithes. It becomes possible to execute these free training schemes while also reaching out to the poor and need in our Churches and the larger society”, he said.
The general overseer said the Church embarked on the project with the conviction that education remains the bedrock of the development.
He urged the students to make good use of the structures and facilities in the school and urged the people to protect the project and guide against vandalism.
Earlier, the Principal of Ikwuorie Comprehensive Secondary School, Dr. Sophie Chikwere Nnadozie, praised the OPM leader for the laudable project, stressing that by his effort, he had turned the structure which was once abandoned and dilapidated into a model one.
She said, “any investment in education is a rightly placed priority which will affect generations yet unborn. Posterity will uphold the indelible foot print of this our magnanimous son”.
Also speaking, the Iyieruba 1 of Ndoki land, His Royal Highness, Eze Nwankwo and his counterpart from Ujuru Autonomous Community, Eze Joshua Okwuonu Dagbor described Apostle Chinyere as a worthy son sent by God to bless Ndoki land.
The high point of the event was the presentation of New year gifts to the staff and pupils of OPM free nursery and primary schools, widows, chiefs, Ezes and staff of Ikwuorie Comprehensive Secondary School.