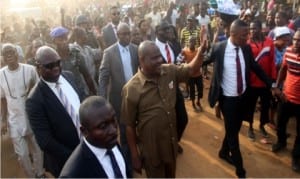 Governor Nyesom Wike of Rivers State (middle), acknowledging cheers from a jubilant crowd that trooped out to welcome him at Bishop Okoye Street in Mile 3 Diobu, Port Harcourt, during an inspection of road projects in the area on Monday