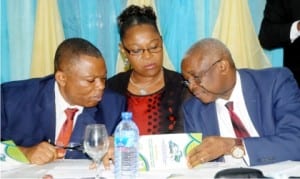 The just concluded cli
mate change conference in Paris, France has demonstrated the commitment of the world towards tackling the incidence of global warming.
The conference which ended with landmark decisions also raised the hope of some countries, especially developing countries, of an end to climate change.
However, Environmentalists and other key stakeholders across the world believed that the key decisions reached at the conference will succeed, if there is enough political will by global leaders, especially major industrialized countries to implement them.
Tugged COP 21 the conference brought together Ministers of Environment from over 190 countries to discuss and find ways of addressing the issue  of climate change which is threatening the continued existence of mother earth.
Key decisions or goals reached include; reduction in green house emission by countries across the world “specially, countries agreed to keep global temperature below two degree Celsius.
“It also agreed to spend the sum of one hundred billion dollars yearly, starting from 2020 to help developing countries”.
French Foreign Minister, Laurent Fabious, who chaired the session, described the deal as a historic turning point.
On her part, South African Minister of Environment, Edna Molewa also described the deal as a major breakthrough for both developing and developed countries.
Molewa who spoke along with the Maltese Minister of Environment, said that  both developing and developed countries made commitment to save the earth from destruction.
She also described the deal as the  first ever approves climate change agreement as well as “a last chance to avet climate change”.
Meanwhile, Environmentalists say, the deal will work, if developed countries stop seeing pollution as an instrument that has commercial value.
A cross section of Environmental Right Activists who reacted to the conference decisions in an interview with The Tide, said that, the buck lies on the tables of developed countries to prove their commitment towards the survival of the earth.
According to them, the Paris conference will succeed, if developed countries stopped aiding and abetting industrial pollution, adding that previous conferences did not achieved results because of the narrow interest of some developed countries.
Dr Fidelis Allen, a lecturer in the Department of Political and Administrative Studies, University of Port Harcourt, who reacted on the outcome of the conference in an interview with The Tide, said that as long as developed countries see pollution as an instrument of commercial value,  the deal will not work.
According to him, “There are fears that developed countries have decided on market instrument on mode of addressing climate change.
“When you make pollution a commodity to be traded in the market, you will not want to cut pollution”, he said.
He said that until countries such as the United States of America, Britain, China and India, which are worst Green House emission countries are ready to cut pollution, the situation will continue.
According to him, “when you make money from pollution, every channels towards its reduction will be blocked”, adding that the concept of climate change is helping few.
capitalist countries who speculate over profit.         The University don however described the deal as a welcome development, especially the decision to keep global temperature below 2 degree Celsius in view of the danger that awaits humanity, if the temperature exceeded 2 degree Celsius.
He also commended the decision to set aside one hundred billion dollars to funding developing countries.
Dr Allen particularly urged Nigerian government to toe the line of COP 21 conference by stopping gas flaring in the country, stressing that this would go a long way to check the impact of pollution in the oil and gas sector producing areas of the country.
According to him, the activities of the fossil fuel industry is destroying the environment, adding that these can be seen in the areas of rising sea level which is threatening the existence  of coastal communities in the Niger Delta.
Another Environmental Right Activist, Mr John Akinnuba described the key goals reached at the conference as a welcome development but urged for its effective implementation.
Mr Akinnuba said that, the world has reached a stage where it can no longer run away from climate change, stressing that decisions reached must be effectively implemented to save Mother  Earth from destruction.
“I welcomed the decisions reached.  It will help the Earth, if key actors in the agreement are committed to its implementation”.
On his part, Mr Steve Obodoekwe who works with the Centre for Environment Human Right And Development (CEHRD) also expressed doubt on the willingness of developed countries to effectively implement decisions reached at COP 21 conference as previous conferences have failed to achieve results.
Mr Obodoekwe however said that, he welcomed the commitments and called on countries across the world to abide by it.
Others also spoke on the same vein.
However, following the French foreign minister’s description of the deals as “Historic Turning Point”, it is now left for countries across the world to be wholly committed and total in its implementation as it is only by so doing that we can save Mother Earth from the impending calamity.