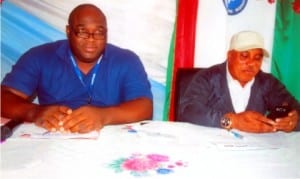 Rivers State Chairman, Nigeria Civil Service Union (NCSU), Comrade O. T. Lilly-West (right), with the State Secretary, Comrade Dan Otakpo, during the inauguration of the executives of the Women Committee of the union in Port Harcourt on Thursday.

We Have No Hand In Dickson’s Sister’s Kidnap -APC