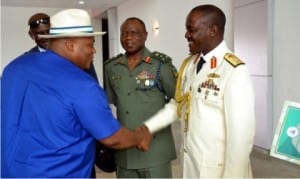 Executive Vice Chairman,
Nigerian Communications Commission (NCC), Prof. Umar Danbatta, has said any network provider that failed to give quality service during Yuletide would be fined.
Danbatta, represented by Mr Reuben Mouka, Head of Public Affairs Department, NCC, stated this at NCC Day at the ongoing International Trade Fair in Port Harcourt.
Danbatta said the trade fair would provide an opportunity to meet and interact with telecom consumers to resolve issues of quality service delivery.
He said the commission had a very active consumer affairs bureau whose sole responsibility was to look after the affairs of the consumer at all times.
According to Danbatta, the commission is interested in events like the trade fair to know the quality of service consumers are getting from networks.
“It is usually more prevalent during the festive period when people move from one location to another.
“The commission is working very assiduously on all issues concerning quality of service in the industry to ensure that consumers are getting a fair deal in the use of their services”, he said.
Danbatta said NCC would monitor the level of their compliance against the Key Performance Indicators set out for quality of services rendered.
“Poor performance against quality of service indicators within this period will attract commensurate penalties.
“We are not relenting in the provision of choices and alternatives to consumers where they can move away from current network and use same number”, he said.
Danbatta urged the public to protect telecom facilities because vandalism of the infrastructure would affect the quality of service.
He said the excuse in some quarters that telecom facilities could cause health hazards had been dismissed by the World Health Organization (WHO).
“WHO has said no known health hazards have been discovered or traced to telephone equipment or infrastructure,” he said.
Danbatta urged consumers to call toll free lines of the service providers to resolve challenges or call NCC’s toll free line should the network fail to resolve the challenges.
The trade fair is organised by the Port Harcourt Chamber of Commerce, Mines and Agriculture (PHCCIMA).

Woji Gets Committee On Scholarship Awards