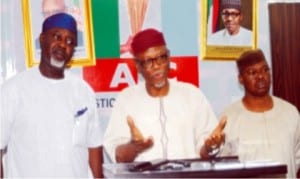 The incumbent Governor
of Bayelsa State, Seriake Dickson and candidate of the People’s Democratic Party (PDP) lauded the cancellation of the poll in the area while the All Progressives Congress (APC) Governorship candidate  Timipre Sylva described as disappointing the cancellation of Sunday’s rescheduled poll in Southern Ijaw Local Government Area.
Sylva described INEC’s decision as a rape of democracy, stressing that he will not accept the cancellation.
According to him, ”We reject it completely. First and foremost, the Resident Electoral Commissioner has no powers to cancel an election which had duly taken place. It is only the Returning Officer that has powers to announce a cancellation or any other thing relating to an election such as this”.
“We had an election on Saturday. In Ekeremor, there was widespread shooting and they beat up a lot of APC members. The home of the Minister of State for Agriculture was under siege; his house was under fire for a long time.  I had to call for re-enforcement before they could subdue the assailants in the morning.
“The assailants retreated and returned again in the evening but elections still held in Ekeremor that same day and returns were made. When APC protested, our protests were set aside and the elections were upheld because of one thing, because PDP won. If the APC had won, of course, the elections would probably have been set aside.  They just put the figures together and submitted the figures and our protests died like a candle in the wind.
“In Sagbama, we did not see the electoral materials at all. Thugs besieged the local government.  A top APC leader is today lying critically ill in the hospital with a broken arm he sustained running away from assailants. They held elections, of course nobody saw the materials and they just filled out the figures and submitted. The APC protested vehemently. Nobody heard our protests, elections were upheld.
“In Nembe Local Government Area, where the APC won clearly, they quickly cancelled two wards and re-conducted those elections on Sunday. On Sunday, no APC member saw any paper or anything at all relating to that election but votes were returned. We protested, our protests were rejected because the PDP won. If you look through, this election ab initio apparently, was set up for the PDP to win but we didn’t want to shout because we are a responsible party.
The Tide learnt that with the results from seven local government areas so far announced by the electoral umpire, Seriake is being trailed by his All Progressives Congress (APC) challenger, Timipre Sylva.
Dickson scored 105,745 votes against Sylva’s 72,594. The PDP flag bearer, who was leading his closest rival with 35, 154 votes before INEC declared the process inconclusive on Monday, tried to stop the election in the disputed council area, but failed.
The PDP applauded the cancellation of the Southern Ijaw election, which it described as a vindication of its earlier position that the commission erred by going ahead with the poll despite security concerns in the area.
In a statement by the Publicity Director of the Restoration Campaign Organisation, Jonathan Obuebite, the PDP said before the election was conducted, it had informed the electoral body and security authorities that the whole of Southern Ijaw had been taken over by thugs and criminal elements.
Obuebite stated that the PDP was for a free, fair and credible election and as such, election in Southern Ijaw must be conducted in an atmosphere that could guarantee the participation of the people.
He noted that as at 4pm on Sunday, election materials were still being distributed and wondered how such process could lead to a transparent election.  He added that it was an orchestrated plan to rig the election as voting went on in the dead of the night.
He said the situation also afforded political thugs to infiltrate the polling units, snatching ballot boxes and intimidating voters under the close supervision of the military operatives.
Obuebite said the whole process was marred by apathy due largely to the wanton violence and mayhem unleashed by thugs and militants. The PDP accused INEC, the police and army of colluding with the APC to rig the election.
He said: “Before now, we knew that the SGF was coordinating the whole rigging plan and we alerted President Muhammadu Buhari and the public.They know they cannot win without rigging through violence and the whole world has seen what happened on Sunday. It was a rape of democracy.
“There was a premeditated effort on a multiple level of conspiracy to rig this election involving INEC, army and the police.