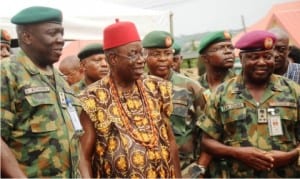 Governor Aminu
Tambuwal of Sokoto State says Nigeria has not met United Nations Educational, Scientific and Cultural Organisation’s  26 per cent annual budget prescribed for education.
Tambuwal stated this while delivering a lecture at the third convocation of Godfrey Okoye University, Enugu.
In a lecture entitled “Tertiary Education in Nigeria: Whither Good Governance”, he regretted that in the world ranking of top 800 universities released in July this year, only University of Ibadan made the list.
According to him, this calls for serious concern given the rate at which tertiary institutions in Nigeria have fallen in standard.
The governor, who was represented by Mr Uzor Azubuike, a former member of the House of Representatives, identified poor funding as the major challenge facing educational development, especially tertiary education in Nigeria.
“Most tertiary institutions in Nigeria are tagged glorified secondary schools, laboratories without equipment and libraries with outdated books,” he said. He pointed out that bad governance resulting in poor funding, unnecessary proliferation, inconsistent policies, weak regulatory frame work, and poor maintenance culture hindered education in Nigeria.
In his address, Vice Chancellor of the university, Prof. Christian Anieke, said that the institution’s research team had continued to identify the specific problems facing the society with a view to finding solutions to them.
He said that Biology department of the school had produced hand sanitizer made from local herbs, stating that it was for the prevention against Ebola.
Anieke added the university had also produced a tricycle from local materials, and it ran on solar.
He advised the graduated students to take their future undertakings seriously in order to uplift the name of the university.
“The Future of this university depends in different settings of human action,” he said. Sen. Gilbert Nnaji, representing Enugu East district at the Senate, who was bestowed with Honorary Doctor of Political Science, expressed joy over the honor, and said that he would partner the university to provide quality education.
Nnaji said that he had built e-library for the university and some tertiary institutions in the state, to promote quality learning among students.