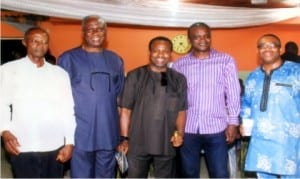 The Junior Chamber Inter
national (JCI), Port Harcourt Metropolitan Chapter, has conferred Partner of the Year Award on Rivers State Newspaper Corporation (RSNC).
Presenting the award on Sunday in Port Harcourt, the 2015 President of the chapter, Barr Onyinyechukwu Mbeledogu, said the corporation was honoured for its sustainable partnership with JCI.
Mbeledogu particularly noted the commitment of RSNC in serving humanity, describing it as the best work of life.
According to her, the corporation has helped the chapter to make impact in a large scale which she said has created opportunities that have empowered young people to create a positive change in the society.
The General Manager of RSNC, Mr Celestine Ogolo, thanked the organisation for the recognition. He also commended her for the high level of positive impact it has made in the society.
Represented by Chris Oluoh, the RSNC General Manager promised that the corporation would continue to partner with the Port Harcourt Metropolitan Chapter of JCI, with a view to propagating its activities.
Earlier in her valedictory speech, Barr Mbeledogu called on all JCI members to continue to work with the president-elect of the chapter.
While also advising her successor to rise to the challenge of taking JCI to new level, she noted, however, that the chapter won 15 awards both nationally and internationally during her tenure.
In his inaugural speech, the 2016 President, Mr Nyeche Mac-Woke, thanked the organisation for giving him the opportunity to serve them and humanity.
He, however, pledged to continue to touch the lives of the less privileged citizens of the society, adding that his government would provide 60, 000 branded JCI notebooks to 60 different schools within 60 days.