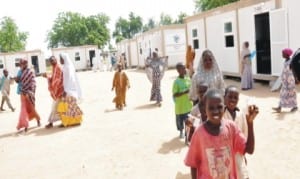 Students of the Mobile Containerised Schools Programme of the presidential initiative for the North East at Dalori idps camp in Maiduguri, recently

Students of Rivers State origin currently on Government scholarship at the University of Manitoba, Canada, have been given a 30-day ultimatum to pay their school fees or be expelled.
A source in the school revealed to The Tide that the ultimatum is sequel to the inability of the Rivers State Sustainable Development Agency (RSSDA) to fulfill its several promises of effecting the payment.
The source, who spoke on condition of anonymity, quoted the university’s Vice- President of Outreach and Engagement, Leah Janzen, as saying that about 50 students sponsored by the agency are currently enrolled at the university.
“The RSSDA owes $2.5 million to the Canadian universities, with the majority owed to the University of Manitoba, the University of Regina and Simon Fraser University. The agency owes more than $250,000 to the University of Manitoba.
“We remain in contact with this organization(RSSDA), and they’re asking us to be patient. But at this point, we’re not sure what to expect from them with regards to those arrears”, the source quoted Janzen.
The source also quoted the Acting Executive Director of RSSDA, Godwin Poi, as saying that the inability of the agency to pay the student’s fees was due to the dwindling economic fortune of the Government. Consequently the government has not been able to regularly fund the agency.
“I can only tell you what the government tells me, which is that the funds are not available. Allocations from central government and state government have dwindled and the state government relies predominantly on the central government for funding”, the source quoted Poi.
When contacted, Chairman of the State Scholarship Board, Mr. Dagogo A. Hart, under whose office the RSSDA was placed by the State Governor, explained that his office could not do anything about the issue.
According to him, he met with parents of some of the students in his office, and before them, he called Mr. Poi, who told him that the Governor only made a declaration about the Scholarship Board supervising the RSSDA, noting that there was no letter to that effect.
He stated further that officially, the RSSDA was placed under the Ministry of Agriculture. Confirming this was the fact that the Commissioner for Agriculture, Mrs.Ominini Jack, was the one that addressed the parents.
He told The Tide that the commissioner told the parents that the state government will pay the fees of final year students in various universities in Canada.
But that those who are not in their final year will be brought back to the State and be admitted in either University of Port Harcourt, or the state-owned University of Science and Technology to complete their studies.
The source further revealed that there are about 250 Nigerian students on scholarship in 14 Canadian universities.