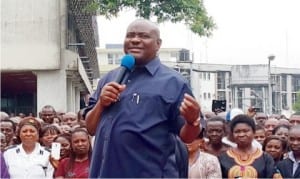 As Governor Nyesom Wike of Rivers State celebrates 100days in office, a cross section of stakeholders and residents of the state bared their minds on the milestones recorded by his administration during this period under review.
Virtually all the respondents spoken to by our correspondents applauded the governor for work well done. They also expressed their joy and delight over the bold steps taken by the governor to once again put smiles on the faces of the people. They cut across all spectrum of the society.
Some of the stakehold
ers, who spoke in separate interviews on the sideline of the People’s Forum at the Obi Wali Conference Centre in Port Harcourt on Saturday, were unanimous that Governor Wike had in the past 100days taken the state a notch further, particularly in terms of the provision of basic infrastructure and attending to the welfare of the people.
They singled out construction and rehabilitation of roads, payment of arrears of salaries owed workers in the state including monies owed pensioners and the bail out of students of the state in overseas, among others as areas in which the Governor has made tremendous impact in the past 100days.
Former Vice Chancellor of the Rivers State University of Science and Technology, Prof Victor Omuaru said he was not particularly happy with opponents of the governor who claimed that he was only completing the jobs and projects started by his predecessor, former Governor Chibuike Amaechi, describing their comments as most unfortunate, as they only fly in the face of common sense and good conscience.
His words, “before I make any comment, I will first like to make reference to some of the comments that have been made by others. That Wike is completing a job that was started by somebody else. If that is the case, it means we will abandon all what has been done by others that were not completed and then, we now start opening new roads may be in Okrika or going to Bakana to open new roads and leaving the ones that are uncompleted. It is most stupid to think that way. When we do this, how many abandoned projects will we be having in the past 100days, Prof Omuaru concluded that the governor deserves commendation instead of condemnation.
Hear him, “instead of commending what has been done, something that was only 20 per cent completed, instead of saying you have tried, you start castigating the person. It is most unfortunate. If you have nothing to say, you keep quiet.”
He further indicated that it would not have also made sense if the governor had forgotten the teeming students of the state in overseas abandoned by the past administration and allow them to rot and die.
“What of the students who are overseas that they kept there? We should leave them there so that they die there, so that we send more students to overseas without taking care of the ones already there? Does it make any sense.”
“Then, the people who have not been paid for months, we should abandon them because it was started by a former government? That we should start paying new people? I do not see how coordinated these things are,” he said, adding that “if people refuse to see what has happened, let them continue to be blind. But those who have eyes, let them be seeing what is going on.”
Prof Omuaru, who now teaches with the University of Port Harcourt said he was impressed with the pace of work going on in the state and advised the governor to sustain the tempo of good governance.
“The only thing is that we are praying to God to grant him the wisdom to sustain what he has started throughout his four years or even 10 years. I am definitely sure, we know him, he is going to maintain the pace,” he intoned.
On his part, the former Legal Adviser of the ruling Peoples Democratic Party (PDP) in Rivers State, Barrister Chima Obinna said the facts of what the present administration has achieved within a short period, speak for themselves, as it clearly demonstrates the fact that Governor Wike is a grassroot politician and one of the most effective politicians who have ruled the state.
“He is one man who knows every part of the state to his fingertips and knows where the shoes pinch the people,” he said, stressing that the governor’s outstanding performance had buttressed the saying that a chick that is going to mature into a big cock is known at infancy, and described the governor’s present development strides as a tip of the iceberg of what Rivers people should expect in the next four years.
Barrister Obinna further indicated that Governor Wike was gradually providing the dividends of democracy to the people because he has what it takes to be a leader.
“He is not just doing this thing as a flash in the pan. He is not doing it to impress anybody. This is somebody who has a programme in governance. He has got the focus and a vision for the people. Indeed, he is a patriot. And you can see how he is addressing issues. He is touching the areas that matter most. And we in Rivers State are very lucky. We have got somebody who would do for us better than what Godwill Akpabio did for Akwa Ibom State,” he said.
He said by attending to the welfare of pensioners, the governor had shown that he was keen on compensating those who have worked.
The legal luminary also commended the re-opening of the courts and the ongoing construction and rehabilitation of roads in various parts of the state, a gesture he said had gone a long way to reduce the traffic gridlock  in Port Harcourt in particular, and advised the governor not to let down the guard, but to sustain the tempo of good governance in the state.

What Traders, Motorists, Others Say