Barely 100 days in of
fice as governor of Rivers State, Chief Nyesom Wike, has made giant strides in sports sector which clearly set his administration out as one truly committed to the development and promotion of the sector.
Indeed the administration is relaunching the state to the frontline of comity of leading sports friendly states and destination of choice for sporting events and competitions.
Even before he was sworn in as the Executive Governor, Chief Wike demonstrated his interest in sports by making football one of the activities that marked his pre-inauguration ceremonies.
That day, Chief Wike led a number of football stars, both ex-and current internationals to entertain the people with a display of exhilarating football at the Sharks FC Stadium in Port Harcourt. That was an indication and a promise that sports would not take back seat in the nascent administration.
In fact, during his early speeches, the Governor underlined grassroots sports development, especially, going back to schools sports, reviving and promoting competitions at the grassroots level as a key policy towards engaging and empowering the youths.
About 100 days on, Rivers State, particularly Port Harcourt has become central and focus of sports discuss, especially football in Nigeria.
In demonstration of his conviction that athletes deserve motivation and remuneration, players of Rivers State clubs, Sharks, Dolphins and Rivers Angels FCs, who were hitherto owed eight months backlog of  salaries were the first to smile as the governor effected their payment.
At a time the Nigeria football Federation, NFF was in a quandary concerning a venue to host the Nigeria’s under 23 football teams qualifying match for the pre-Rio 2016 Olympic Games and states under the yoke of financial crisis were avoiding such burden, Governor Wike stepped into rescue the federation.
He, not only presented the state as a host, his motivation played pivotal roles in ensuring victory and paving way for the team’s qualification for the African Olympic qualifying tournament.
Since then, Port Harcourt has become a home for National teams as Super Eagles’ matchless and other national teams have been billed for the imposing Adokiye Amiesimaka stadium, at least Super Eagles next three matches beginning with their international friendly with Niger Republic tomorrow will be played at the stadium.
Only yesterday, the state, for the first time in history hosted a competitive grade A international match between two countries when Sierra Leone and Ivory Coast clashed in a 2017 African Cup of Nations qualifier in Port Harcourt. The state had offered to assist the NFF bail out Sierra Leone who could not host international matches at homes.
These plethora of international matches have gone a long way to re-establish and proof that peace and safety have returned to Rivers State which have further boosted tourism and investment opportunities in the state.
Governor Wike in further demonstration of his wholesome positive disposition towards the sports sector has extended hand of fellowship to the sports writing family in Nigeria who he assured of partnering for effective sports development in the state and Nigeria.
Rivers State a couple of weeks ago hosted the National Full Council Meeting, the highest decision making body of Sports Writers Association of Nigeria, SWAN, which has been adjudged to be the best of its kind in the association history.
Assessing the performance of the Governor in a little over three months now, chairman of Rivers State chapter of the Sports Writers Association of Nigeria, SWAN, Mr Honour Sirawoo scored him a nine on scale of 10. According to him, “The Governor has done well for the sports sector. He started well by offsetting the debt owed the state clubs for over eight months. His willingness to host international matches at a time other states are running away is an indication that sports is dear to him. We hope he continues to remain in the path of sports development and give the state the fillip to rediscover their elements and once again play leading role in sporting events and competitions in Nigeria.
For the Director of sports in Rivers State, Sir Daobu Harry, the Sports Council is hopeful that things can only get better as they pray that the Governor does not deviate from the commitment to sports which he has shown so early in his administration.
According to the Director, “The Governor has done well. It takes a big heart and courage to do what he has done so far in prevailing circumstances. The sports sector has gotten new lease of life since his coming into office. Apart from relaunching the state to international spotlight, sports association in the state have begun to attend national competitions, we hope that it continues to get better.” 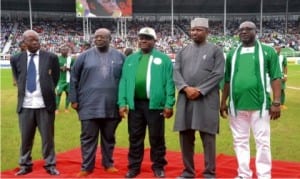