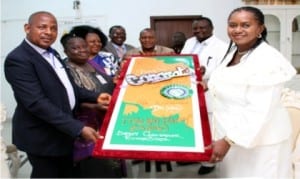 The United Nations
Children’s Fund (UNICEF) has revealed that 194,000 children under five years of age die of diarrhoea diseases every year in Nigeria.
UNICEF said ‘diarrhoae diseases account for nearly 1.3 million deaths annually among children less than five years, making them the second most common cause of children deaths worldwide. Over half of the deaths occur in just five countries: India,  Nigeria, Afghanistan, Pakistan and Ethiopia’.
According  to the fund, 88 per cent of deaths arising from diarrhea among these children are associated with unsafe water, poor sanitation and hygiene.
Worried over this alarming rate of child death due to this salient killer disease, medical experts have observed that diarrhoea  – the frequent and excessive discharging of thin watery stool, results in death in the absence of proper medical intervention adding that good sanitary habits like hand washing campaign could be used to save the lives of many children who die unnecessarily every year in Nigeria.
The team of experts who spoke to The Tide during an immunization exercise at the University of Port Harcourt Teaching Hospital (UPTH) last Friday, prescribed hand washing with soap or ash at critical times such as before handling food and after defecation or changing of diaper as ways of effective control of the disease.
They said “parents, caregivers and guardians should be enlightened on hand washing strategy which could save more lives than one single vaccine or medical intervention. Children should also be encouraged to promote hand washing campaign because they are the key agents and would often go back to teach their siblings, parents and friends”.
The doctors who noted that in the event of outbreak of diarrhoea, prescriptions such as Oral Rehydration Salts (ORS) and zinc tablets would be effective in treating the disease said “ some years ago, we were using ORS which is just salt/water solution but at the moment, we preach that people should use it alongside zinc tablet. This is because the ORS will deal with the dehydration that the child will suffer during diarrhoea while the zinc will restore the child’s energy”.
The Tide researched that diarrhoea and other hygiene related illnesses can be deadly for young children while good hygiene is important to their prevention and hand washing was the most effective way to control the spread of various types of infections and illnesses in the society.
Stakeholders in the health sector have also noted that safe sanitation practices through promotion and proper hand washing have proven to be the most cost effective public health intervention against diarrhea and insist that the public should encourage regular practice of hand washing among children, families and communities to curtail the rate of child deaths in the country.