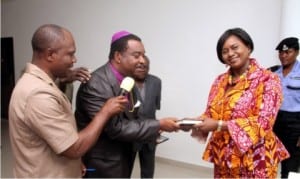 Rivers State Deputy Governor, Dr. Ipalibo Harry Banigo, receiving a bible translated in local languages from National Board member of the Bible Society of Nigeria, Most Rev. Dr. John Fineface, during a courtesy visit to the Deputy Governor in Port Harcourt recently. With them is the 1st Vice Chairman, Mr. Ayotamuno Omoni (left)

Rivers State Govern
ment has charged religious leaders to organise regular Bible quiz and debate among youth in schools to help promote good morals in the society.
Deputy Governor of Rivers State, Dr. Ipalibo Harry Banigo, made this known when members of the Bible Society of Nigeria paid her a courtesy visit in Government House, Port Harcourt.
The deputy governor described the Governor Wike-led government as a caring government committed to the service of the people of the state.
She commended the Bible Society of Nigeria for their efforts in translating the bible in some of the languages in the state, noting that the move would promote the identity and culture of the people.
Banigo thanked them for their support during the elections, and urged them to continue to pray for the state and remain steadfast with the word of God.
Earlier, the leader of the delegation, and First Vice Chairman of the Bible Society of Nigeria, Mr. Omoniyi Ayo-Tamuno, felicitated with the Rivers State government on the tremendous facelift given to the roads in the state that where hitherto in a state of disrepair.
Ayo-Tamuno said the state governor, Chief Nyesom Wike has turn the state into a massive construction site within a short period in office, and solicited the cooperation of Rivers people to enable the present administration deliver on its promises.
He said the Bible Society of Nigeria has the responsibility of printing and translating the bible into local language, noting that so far the organisation has fully translated the Bible into Khana language while translation in Gokana, Eleme in Rivers State, Epie and Ogbia in Bayelsa State have reached advanced stages of completion.
The chairman of the society used the opportunity to solicit for the building of a Bible House to curb the accommodation challenges facing the body, and also invited the deputy governor as special guest of honour during the Life Members’ Conference scheduled for November in Port Harcourt.